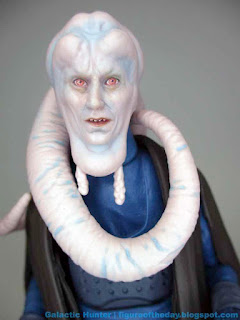 Bio: Those attempting to do business with Jabba the Hutt first needed to maneuver past his pasty-faced majordomo, the Twi'lek Bib Fortuna. (Taken from the packaging.) 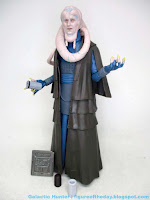 Commentary: In 1983, Return of the Jedi kicked off with Bib Fortuna right at the start. When Star Wars relaunched under Kenner in 1997, he was in year #3, almost exactly 25 years ago. When it came to The Black Series, Hasbro has been dragging their feet when it comes to classic original trilogy aliens and Bib Fortuna comes to us a whopping eight years into the 6-inch scale's run. We got Jabba pretty early on, Slave Leia was in wave #2, the Carbonite block was a preview exclusive convention item, and a Gamorrean Guard came out a few years later. And of course we've since got Jedi Luke, Boushh Leia, and Skiff Guard Lando - but creatures and aliens were in very short supply, which is one of the reasons I was super lukewarm about the 6-inch scale Rancor monster. A centerpiece of the scenes in Jabba's Palace, but in a collection, there's not much for him to go with just yet.

I'm glad he's here, but the design feels like the best 3 3/4-inch figure design made as a 6-inch figure. The figure is a mix of old and new elements. His pants come from the Dryden Vos release a few years ago, with new feet. Everything seems to be new - new rubbery outer robes, new chest armor piece, new head, new arms, and some surprisingly good new hands. The fingernail claws are some of the sharpest things I've ever touched on a Hasbro product. The wrist bracelets look great, the fingers are sculpted spread apart in interesting ways - much like the character in the movie - and the arms can move a bit under the rubbery robes. The legs basically can't move at all, and since you'll never see them, reusing existing tooling makes a lot of good sense. (I'd say Hasbro could also just make it a chess piece under there to lower the costs even more. Those double-jointed knees serve no function here.) 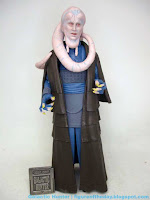 The head, elbows, wrists, and more or less shoulders move just fine. To do Bib Fortuna right, all you need are moving arms and the head, and Hasbro delivered. The sculpt is pretty good with lots of nice detail, and a paint job that's good but not great. I like the skin color, the eyes are fine, the robes look perfectly nice. What I don't understand is the blue wash over the skin in spots. It's not like they're visible veins or anything, it just looks like someone tried to add some definition or shading and made a poor choice of color with which to do this. Most other collectibles, official photos, trading cards, or other reference images don't s how blue bits - so why are they here? To give me something to nitpick on an otherwise perfectly adequate figure? Let's say yes.

Accessories can make or break a figure, and Bib's hands don't lend themselves to gear. Heck, in the movie it's not like he had a staff, a blaster, or a knife - but Hasbro gave him something. We get three drink glasses, and the fingers have enough give to hold them. I wouldn't store them there, because I assume they will warp those perfect digits over time. I don't think the cups help anything, so they'll probably go in a baggie so I don't lose them. (I will lose them.) I wouldn't have minded a Kenner-style staff either, but with the film's 40th anniversary next year it's entirely possible Hasbro is planning a brown/red coat Bib Fortua with the requisite accessory. I mean, I'd do it.

For long-time collectors, cool Return of the Jedi alien figures are so scarce that you know I'm going to recommend this one. Hasbro can do better - a redeco would probably be perfection - but this is perfectly good now as the best/only choice. I'm surprised XL Bib Fortuna from The Mandalorian didn't make it out first, but I would assume Disney said to Hasbro "make a Bib Fortuna figure," and Hasbro shrugged at what would seem like a weird request which ultimately made sense. For this figure to be in our hands now, development probably started before he appeared on the Disney+ show in 2020. But I digress - I appreciate a good classic alien, and this is indeed a good classic alien. And much more exciting than the endless video game troopers and metallic repaints. Show Hasbro you care, and buy one. Heck, buy two.