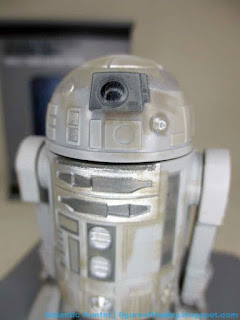 Bio: n/a (Packaging has no copy and no Star Wars logo.) 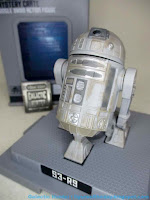 Commentary: Oh, you better believe we've got a lot of droids on deck. S3-R9 is a curious one on so many levels. For starters, it's a terrible match for the prop - they used the wrong dome for starters, and the colors don't match the photos of the droid at the theme park. It's a weird mismatch, and one most fans will neither notice nor care about. Seriously, at the end of this review? You won't care. You might want the grey robot, but its authenticity will have absolutely no bearing on your desire to buy it. (He's also very close to R2-BHD [FOTD #2,296].) I'd go as far as to say Disney made a bad pick for this deco, especially given just how dreary the entire batch of crate droids look compared to colorful counterparts elsewhere.

Both Hasbro and Disney have given us a number of gray robots, but this one is notable in particular because the dome is an R3 dome, molded in opaque gray plastic. That's unusual! The giveaway is there's a silver patch on the right of the big eye - but also, the panels around the base of the dome are a different design entirely. The "pie slices" on top of the head are different too. If this weren't Disney's own line and own molds, I'd say maybe the tooling was busy, but historically Disney has had zero problem cranking out countless domes of various colors for delivery at the same time. So why did they go with the wrong dome here? Because they didn't notice? Because they thought (rightly) that most of us wouldn't notice nor care? 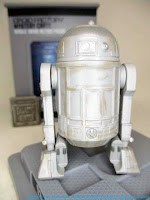 When you look at photos of S3-R9 on Wookieepedia, my first thought was "is this the same droid?" While the mold is nothing new or special - they've been using these molds for almost a decade now - the deco doesn't match. The base plastic is gray and pretty much right on the money, but check out the panels. The dark grays are much darker, almost blck in spots. There seems to be an entire ring around the top of the dome that's missing, plus more dark gray around the eye box that was left off. The prop holo emitter seems to be chrome and shiny, and us completely unpainted on the action figure. The figure also has a silver stripe painted running around the sides, and on mine it appears to be a little uneven.

Your taste in robots will probably decide just how much you care about this figure. It's a neat droid! The drab gray with some silver certainly is striking, even if Disney already put out a similar robot. Unfortunately it's off-model enough that if they did another take on this one, I'd probably suggest buying it too/instead. Disney did paint in some dirt on the droid's body, but the brown is so light that it's kind of hard to see against the similarly light gray plastic. They even painted some dirt on the back that's practically invisible because there's not enough contrast. If Hasbro got the colors this far off, I assume fans would be a mix of upset and indifferent. By making it a theme park exclusive, a lot of fans will probably never have a crack at this and on the whole won't ever care - but droid completists will be curious to get another robot. A robot that exists solely as scenery at a theme park, but still, it's a robot, and it's $15, and you've bought better for cheaper.