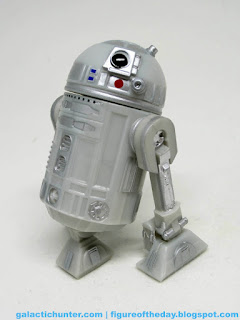 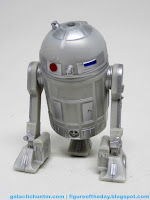 Commentary:  It's kind of weird reviewing background droids with no backstory.  It's also weird reviewing figures from a movie I haven't seen yet.  Guess what? R2-BHD could fit these criteria and more - I just don't know.  What I do know is that this is a silver plastic droid with silver-er panels and paint deco, and that apparently someone deemed it interesting enough to sell as a cardboard standee.   Right now I don't know anything about it - is it a good droid, a bad droid, an alien's droid, or a deactivated pile of parts in the corner of Baze Malbus' ship?  Could be.

Comparing the droid toy to the droid photograph, it looks like Disney's toy crew got this one right.  The body is (basically) grey/metal/silver, with painted silver highlights that pop nicely.  It adds something to the toy, much like C2-B5'a black-on-black turned out quite nicely.   R2-BHD has silver panels, highlights, uh - toenails? - and a little red sensor under his shiny black eye.   They even painted the little dots in the neck region of his body, which means... I don't know what it means.  I haven't seen dots in there before.  Maybe they're some sort of "Simon" game.  I have no idea.  All I can tell you is that the deco matches the picture, and you can tear off his arms and legs if you want.

I like it because it's different.  We've had two (count 'em) two different silver R2-D2 action figures during the time where Hasbro thought that was a thing that we'd all like, one of which is a U.K. exclusive from a The Saga Collection "Episode III" multi-pack that you are only just now realizing that you never bought.   (Don't look for my review, I still haven't bothered to open up any of those silver action figures from the 2000s.)   This R2-BHD isn't 100% the same color, though, and for that reason he's interesting enough to plop in whatever diorama you may have.  Mine is "all the too many droids I have" diorama, which is under construction and I hope will be done in mid-2017.

Because it's different I'd suggest that you should get one.   Is this a good reason?  No.  Is there any really good reason to own more modern-era astromech droids than there are different figures from the entire original 1970s and 1980s line?  No, but I'm doing it anyway.  Don't judge me.