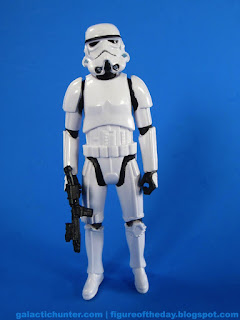 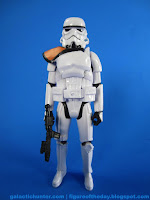 Commentary: I love this Imperial Stormtrooper as much as I was confused by it.  Early photos showed a strange chest with a clip-on armor bit, but since Hasbro decided to not actually properly announce it or explain anything anymore, I got to guess.  The packaging sort of explains that the apron is a battle-damage gimmick, and if you assemble it correctly you can make the chest fly open - taking the pauldron with it - to make it look like the figure got shot.  And if you leave it completely off, you just have a nice, plain, glossy white Stormtrooper just like you probably remember (some of) your vintage Kenner ones being back 38 years ago.

The trooper itself is not the same sculpt or mold used for Mission Series.  He's about the same height, and has many of the same details, but they're different sizes or tweaked a tiny bit.  He still have 5 joints and a swell ball-jointed helmet, but the shiny finish isn't something I think we get enough of these days.  This feels like a much better version of the 1978 figure, with a different blaster - note the magazine, and what I assume is a scope or a rocket - setting it apart from other releases.  It's unique. 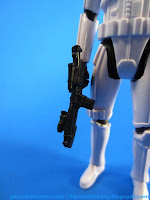 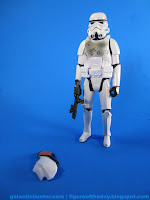 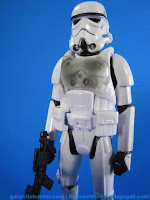 Because of the armor there's no big and weird bonus accessory - I would have loved a "classic" blaster so I could tell you all to run out and troop build this guy, as he's so retro it hurts.  Seriously, you're gonna love this one unless you demand elbow joints or something.  As a plain ol' Stormtrooper, this is a nice enough figure that's just going to make you furious that Hasbro didn't do a new Death Star to do double-duty as a 40th Anniversary toy and a Rogue One tie-in.  Ah well.   I still dig it.

This is the first figure that I have bought in 3 years. I have come out of my action figure collecting retirement because of this figure.
I am very happy with it. Great sculpt.