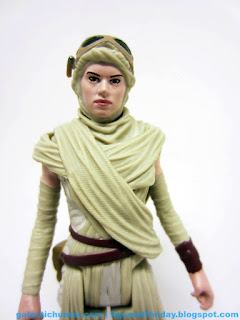 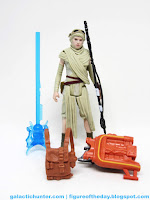 Commentary: Because she's popular, here's Rey.   We found out Rey was the new Luke last September, and her action figure selection confirms this - back in the 1990s we got a bevy of Lukes from the original movie with unique helmets, hats, ponchos, and other accessories.   Rey currently enjoys 5 different (well, 4 unless you're an accessory completist) 3 3/4-inch action figures, 4 of which share similar if not identical bodies.  If you're an all-in fan of Rey (and boy howdy am I) you probably really appreciate it when Hasbro puts in new parts and makes big changes to the figure.  This one delivers enough changes to be worth your while. 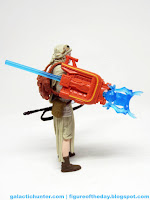 The big changes over Rey [FOTD #2,191] from last year are the head, the rocket launcher, and the torso wrappings.  The arms, legs, and torso seem to come from the same (I presume) digital sculpt as the others and other figural products.  There are minor differences - feel free to compare the markings on the boots - with the plastic outfit seemingly a little more saturated in deco.  There's a hint of yellow in here, as opposed to the more muted ran color of the original.  It stands apart.   It also stands quite nicely.  Another cool bonus - despite having chest wrappings and a wrapped head, Rey retains neck articulation this time.  The figure has a good face sculpt and decent deco - the head is molded in the wrapping color with a painted face, which actually serves Rey well.  It helps to avoid the whole skin translucency issue we see with other toys. 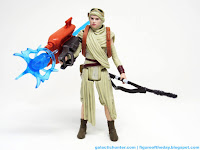 While her staff and backpack offer nothing new, that rocket launcher on her arm is a delight.  I'm not saying you'll love it, but for those of us who love the toys of the 1990s where a big spring-loaded weapon dongle was standard issue?  I  believe we'll all love what they're trying to accomplish here.  The painted, arm-mounted launcher is modeled after her speeder vehicle with the orangey red color and some added deco to bring out a little detail.   She has no real problems wrapping it to her forearm, and most shockingly to me she has remained standing on my desk for days without toppling over due to an imbalance.  It's a decent, bulky weapon too - I'm impressed!  The blue blast-capped rocket shoots out of the launcher fairly nicely, but it's not as amazing as the distance you'll see on the Nerf launchers.  It goes a couple of feet, which isn't bad. 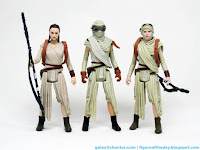 So!  Do you need this Rey?  Probably not - the cinematic weight of the costume can't be ignored, but its brief on-screen presence probably won't mean this will be your first Rey purchase.  I love strange costume variations and unique helmets and hats, so seeing this figure on the market so soon shows Hasbro does indeed remember how to milk a hero for all of his or her costume variants, and I'm pretty jazzed I didn't have to wait 20 years to get one.   It's way more interesting than a repack with new accessories or a lightsaber, and the actual toy component is pretty good and quite creative.   I assume it'll sell well, because it's Rey, but in and of itself it's an interesting piece and far more exciting than the rocket launcher kickboard accessory from 2015.  Maybe we can get a scarred, unmasked Kylo Ren next.  (I'm being sincere, I'd like one.)