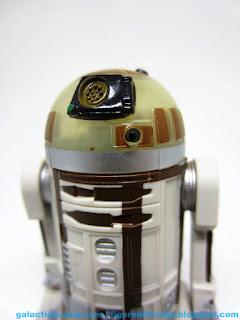 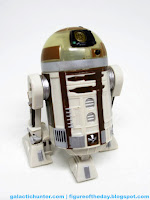 Commentary:  Here's a surprise - R3-M2 has a new dome mold, the only one in the set.   Some older renderings of R3 droids - specifically R3-01/R3-M3 [FOTD #1,301] - have domes like this one, so maybe Disney has just cracked open the door to give that one another shot.  I hope so, Hasbro's take was always a little murky.

The body looks similar to other recent droids, with stripes running up and down plus a positively giant one running down its back.   The off-white body and earth tones merge to look like a robot that could be rolling down shag carpeting, perhaps next to a space princess in bell bottoms.  It feels very 1980s - and so does the dome, yellowed by the sun or stained by coffee in appearance.   It has a textured eye - possibly a first in Astromech droid toys - and lacks much of the detail from the other ones.  There are fewer panels and sensors here, plus the addition of a seemingly true-to-movie-R3s-but-we-never-complained-before silver equator at the base of the dome.  This seems to be a key R3 feature from the movies, but your toy collection completely lacks it. 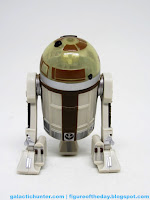 So in short, this new dome means you could have reason to re-buy every R3-series droid.  Oof.

The feet have silver "toes" and like all Disney droids since the second wave, there are no wires on the feet.   A shame, because these are largely very good - and this missing feature is a permanent asterisk when it comes to determining if the figure will suggest the door is still open for a revision later.  With a couple hundred droids out there to collect you probably don't need - or want - droid revisions, but we've been getting quite a few of them in recent years.   Demand something new!  You're worth it.  This is new, so get a R3-M2 if you love your Astromechs like I do.