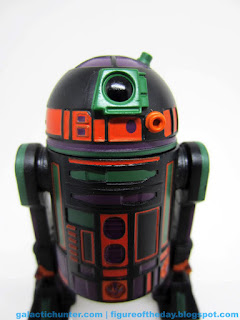 Bio: All different types of Astromech droids populate the Star Wars galaxy.  Each droid is different and has their own unique personality and colors.  This devious Astromech is a space pirate that can often be found on the planet Takodana.  Join R2-B00 on his adventure throughout the galaxy.  May the Force be with you... and your Droids!  (Taken from the figure's packaging.) 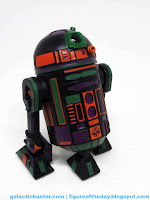 Commentary:  After more R2 units than you can shake a stick at - trust me, I've tried, I need a bigger stick - it's rare to see "firsts" in this category.   R2-B00 manages to be the first Halloween-themed Star Wars figure, the first Takodana figure, and the first "off-camera" new creation placed during The Force Awakens, or so I'm assuming from the packaging.   I also don't think I've ever seen a black droid with green, purple, and orange on it.  It's kind of ugly.  It's kind of great.  It's kind of like the sweaters that one guy on that show used to wear, but we're not about to namecheck this individual. 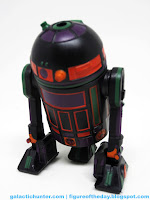 The mold is the same as the majority of R2 units you've bought at Disney parks since the wires were dropped from the feet, and the deco is unlike anything else I've got.   A long (long) time ago I pitched blank droids as an exclusive idea so people could come up with strange, original designer droids like this one.  I may have also mocked up a Clone Trooper that looked like Samus Aran, but that's another story.  This one looks similar to the other recently released black droid other than the paint, and oh, the paint.   I don't think we've ever seen a droid with this many painted panels - nearly every rectangle has at the very least an outline.   Some panels are green with orange borders.   He costs more than other holiday/event droids, he has no hat, but boy howdy does he make up for it with the orange paint.     It's overwhelming.   I don't even know why he has so much, or why Disney went with these colors.   It's not exactly spooky or ghost-like, either.  It doesn't quite recall any specific piece of Halloween lore, but the colors evoke this time of year.  Sort of.  The placement of the green seems odd, and the purple I just don't get - but it's weird enough that I like it. 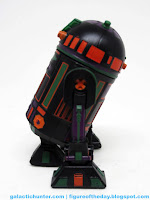 I'd love to see more of these.  Maybe an orange droid with black markings like a jack-o-lantern. Maybe a black droid with skull-like deco on the dome.  Or a glow-in-the-dark droid, which I would be willing to commit illegal acts to obtain.  R2-B00 is certainly a sight to see with rolling wheels and articulated ankles, but one detail I should point out is the opportunity that Disney missed.  This droid's paint sadly does not react to black light.   I was expecting a glowing, insane nightmare robot and what I got was pretty benign.   Ah well.

Like the silver figures of 2002ish-2006ish and the Holiday Edition figures and other Event Droids, you probably could skip this and your collection wouldn't care.   Because toy-only characters aren't really a big part of the canon, this little robot's appeal is probably squarely in the court of your love of color.   You have no reason to own this figure, but the way I see it you should have a toy that's just for Halloween so you can listen to your Oingo Boingo records while futzing with it and handing out candy to the tiny tots.