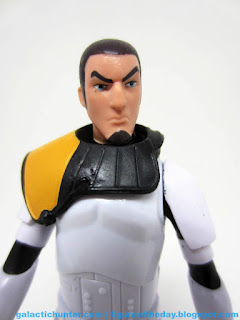 Bio: Kanan Jarrus was a Jedi Knight among a small group of rebels known as the Ghost Crew.  He carries a lightsaber and a blaster - an uncommon practice for a Jedi.  (Taken from the figure's packaging.) 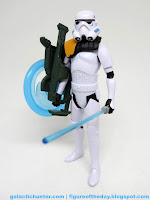 Commentary: There have been many versions of Kanan Jarrus so far, but this one - shockingly - isn't just a Stormtrooper with a new head.  The figure is a whiter plastic, and it seems each and every part is new - you'll notice details which differ slightly from previous Stormtroopers. 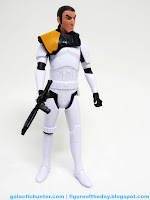 The head sculpt is completely new, with one of the most expressive faces on a Star Wars figures in years.  Most faces are just a boring, resting face - once in a blue moon you'll get a screaming face or closed eyes, but this Kanan has a head that shows what he's thinking.  Or smelling.  A raised eyebrow and sneer shows determination or loathing for the Sith... or perhaps he just smelled a fart.   You decide.   It's incredibly distinctive and a real departure from what Hasbro has done, well, almost always.  Smiles are rare, frowns aren't particularly common, and so many aliens/droids/helmets are incapable of emoting anyway.  Hasbro deciding to make an all-new sculpt from head to toe is curious, but the decision to give the ball-jointed head this much personality is most intriguing.  I hope we see more of this as the Rebels trickle continues. 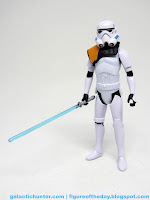 Articulation is exactly what you've come to expect, with 5 joints.   The ball-jointed neck is the most interesting change of pace from the previous animated Stormtroopers, but the helmet is nifty in that Hasbro cut out chunks of the interior to fit Kanan's hair.  Thank you, Hasbro!  Sometimes it's a tight fit or scrapes, and while this is indeed a tight fit I appreciate the foresight of mixing up the helmet to make it fit better. 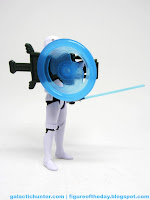 The energy launcher is, well, it's there.  It fits in his right hand quite nicely, and it launches adequately.   His lightsaber and blaster also fit nicely, giving you options.  Heck, you can even pop that pauldron off and use this as a standard Stormtrooper, which is what I plan to do if/when it hits clearance.

As this is an all-new figure instead of a simple head swap, I remain surprised.   It's a win for Hasbro, although not necessarily one for the bean-counting we see so much of in product development.    If you buy Rebels figures you've probably got this one already, and if you don't he's a good place to start.   I'd go as far as to say if you only buy one cast member from the show, this is a good choice.   Here's hoping the line goes long enough to get Kanan's changing look in from the end of Season 2 and the beginning of Season 3. 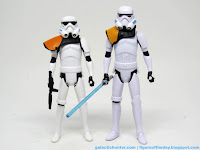