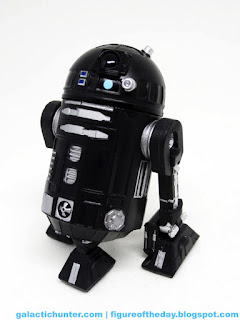 Commentary:  If the name C2-B5 sounds familiar, it should - a few of them are being made.  Disney has a die-cast metal one being sold, plus Hasbro has one as the AT-ACT pack-in droid you've been fretting over.   If you just want a 3 3/4-inch C2-B5 and aren't picky about its Hasbroness, or just don't want the AT-ACT, this version is a cheaper alternative with more articulation.   I'll do a more direct comparison between the two when I get the AT-ACT version in the near future. 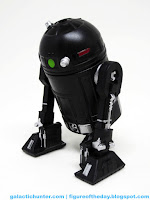 You've seen this droid mold before.  Many times.   Every straight-up R2-style Astromech from Disney since the wireless legs were introduced uses this tool, but the deco is unique in that it's black plastic with silver - and black - painted highlights.  It's the executive edition droid, and so far we don't know much about it other than it's potentially Imperial and may be related to Darth Vader, but I don't think it's official either way at this point.

Deco is unique - there are many other black astromech droids, but black ones with glossy black detail and silver highlights are scarce.  Mine has a blue sensor light, while some of the other photos show a red one.  You'll recall in the movies, these tend to switch colors as a course of function.   Each leg has silver details and even the central foot has a silver stripe on it, while the back of the dome has a big green light and a rectangular red box.   It's probably the droid you'd vote most likely to look at home in a serious scenario thanks to its formal coloring and lack of splatters, dirt, or other signs of aging.

As with the other Disney droids, you've got rolling wheels and jointed ankles on the two big legs.    It holds together well and looks like it could fit in pretty much any Empire installation, vehicle, or diorama.   The fact that it has more articulation and is a cheaper buy-in than Hasbro's AT-ACT bonus figure may make it especially appealing to droid fans, although the true completists may have been left wishing for another, different droid just to mix things up a bit.  Do we really need multiple C2-B5 figures?  Maybe - we don't know yet, but we'll know if we care in about two months.  At least the design is cool.