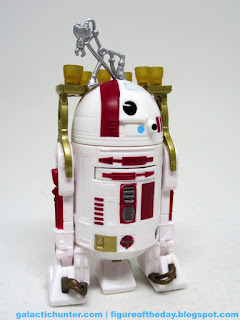 Bio: There isn't one.  That's how obscure this is. 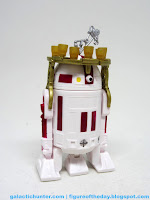 Commentary: Over a decade ago, a friend hipped me to Jabba's Bartender.   It reminds me of a mix of a soda can and David Bowie ca. Aladdin Sane.   You can find him tucked away in Jabba's sail barge... maybe.  He's in the dark and there's very little photo reference of him.   I have no way of knowing this, but I suspect his deco was at least partially inspired by the various customs out there.   A good shot of his dome exists, but everything else is pretty murky.   It's not entirely unprecedented for this sort of inspiration to take place in the toy business.

First up: the early samples of this set had carved markings in the domes to indicate they were early samples.  Final production do not feature these disfiguring marks. 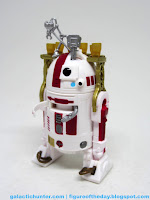 Jabba's Bartender is a gleefully obscure little robot and one of many (many) that were brought up on the first day of this set's gestation.   It was a nod to a pal and a sensible redeco - the mold existed, and the plan from day one was to do Ziro's Bartender at the same time.   The droid is a redeco of Vintage R2-D2 [FOTD #1,961] - a mold I never would have guessed had so much potential.   There are a number of red panels and a glossy black eye, plus some gold bits that match the harness quite nicely.  I love the deco overall, but the panel on the sensorscope doesn't quite match the rest of the white dome.   On one hand, it sticks out - on the other, at least you know where the pop-out part is. 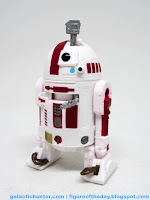 He has 7 points of articulation, and lacks the lightsaber from the R2-D2 release in 2010.  This is OK - there's really no reason to include it here.   By far one of the best and completely unnecessary features is an opening chest compartment with an arm that swings out.   If you need more droids for your Jabba's Palace shelves, this is one you shouldn't go without.    If you're good, well, this may not be the right hobby for you.   There aren't a lot of new classic trilogy characters out as action figures in a normal year, and I couldn't resist an opportunity to add to my favorite movie for toys.   I wish it got a name, but such is the way of things - you don't always get what you want exactly the way you want it.