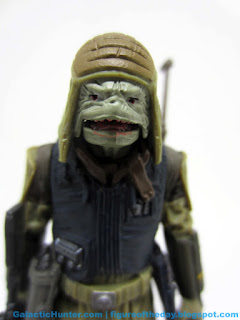 Bio: An amphibious Drabata, the fierce commando Pao charges into battle with a full-throated battle cry of "Sa'Kalla!" He joins the Rogue One team on its historic mission to secure the Death Star Plans.  (Taken from the figure's packaging.) 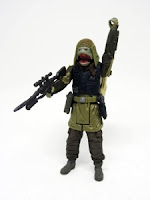 Commentary: Because I am poorly educated, I had to look up Republic Commando Pao's name because we had an alien named after a corn fritter.  It only makes sense that this one could be named after Kung Pao Chicken, which is derived from words that I think mean that - if my hunch is right, I haven't seen a making-of book yet - his name could mean "Guardian."  Or not.  The alien race is a new one, with a new design that looks like it could have plopped right out of Return of the Jedi.   The specialized hat looks like it could be a flight cap, the backpack is clearly standard-issue rebel trooper stuff from the second two films, and the alien-ness of it could be from Jabba's palace.  It's a winner.

The figure has 5 points of articulation, but one is pretty amazing.    Sure, you've got swivel limbs that work great and the figure has no problems standing or sitting down.  That's nice.  But what's amazing is the jaw joint - the alien is seen yelling or screaming in images, and the figure can also do this.  His open mouth has painted teeth - and it's a really, really big mouth.  I was impressed by how they rounded off the tail of the figure, giving it a more realistic looking backside when seated compared to the squared-off kama of the Shoretrooper.   I can't help but be impressed by the vest, gloves, wrist ammo, belt, boots, and backpack. 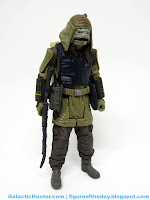 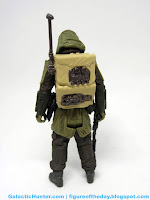 The backpack should look familiar, as a similar design has been used for various action figures since 1997.   It has a little paint on it, but just enough to bring out some detail on the back.  The rifle is a little rubbery and bent, with a distinctive-but-familiar look to it.   I'm sure it's based on some real guns and I don't know what those are.   It's a nifty figure and a solid 2-pack - and it'll be repackaged as part of a Kohl's gift set shortly, if not already.   There's a lot to like in Rogue One and this is one of my favorites, having not seen the movie.   Hopefully he'll be cool!