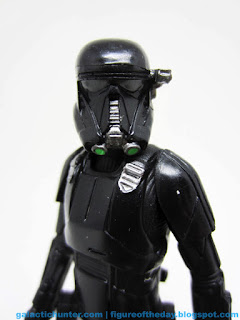 Bio: The elite soldiers of Imperial Intelligence, Death Troopers are encased in specialized Stormtrooper armor with a dark, ominous gleam.  (Taken from the figure's packaging.) 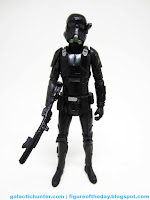 Commentary: It's sort of a dorky name - and one that was used for the "zombie Stormtroopers" in a novel (and mini-busts) a few years ago.  This Imperial Death Trooper is one of three we've seen so far - there's one with sand on it for Kohl's, and Walmart has a super-articulated version with extra weapons and armor/gear.   In other words, this is the boring one. He's unusually tall - almost Vaderish - and very skinny, with long legs. 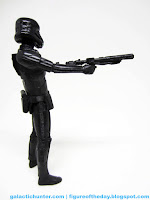 The design, like most Imperials, looks like a remix of things you've seen.  The helmet looks like a Biker Scout and a Stormtrooper mated with Boba Fett's rangefinder.  The armor borrows heavily from the standard Stormtrooper, adopting a more symmetrical look with Darth Vader's belt buckle, some shoulder buckles, and lots of extra grooves in the Stormtrooper-ish arms.   It's almost fanfictioney in how it jumbles so many familiar elements into a new design with a very 1990s name, but it looks cool.    The lenses on my sample aren't as green as some of the other products, but maybe there's a variant coming later.  I hope so and hope not.

He stands fine, and holds his new blaster rifle without a hitch.  The look of the figure and weapon feel like they could have been floating around in a higher budgeted version of the original trilogy, with a giant rocket-launching backpack that feels like it's 1990's finest Kenner design.  It plugs over the shoulders and makes the figure a little too top-heavy. Standing unassisted is a challenge.  The clear green rockets look great and the distance is good - but it's a ridiculous accessory that doesn't exactly do wonders for making it look like a real weapon.  Moroff, Poe, and Baze Malbus each have weapons that look heavy - and their gravity can be seen on the designs, with the heavy parts lower to the ground.  The Death Trooper must be ridiculously strong, too. 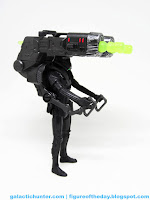 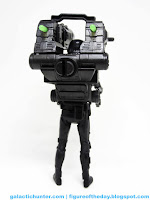 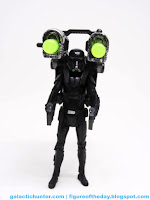 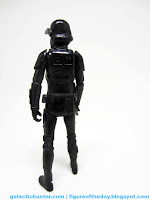 Given that there are supposedly six of these guys in the movie, I'm a little annoyed that they're sold in multi-packs and as exclusives when a single carded version would probably sell like hotcakes.  Right now you'll have to find Walmart's exclusive if you want singles, or shell out for a $15 2-pack or a set at Kohl's that, due to its crazy pricing, could be $24-$50.   Get yourself a few Death Troopers because they're neat, but if you're a member of the one-of-everybody club you're going to find yourself with at least three as it is.