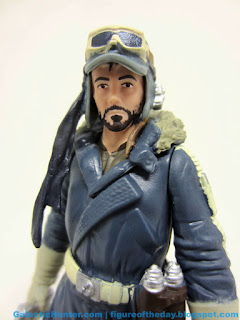 Bio: An accomplished Alliance Intelligence officer with combat field experience, Captain Cassian Andor commands respect from his Rebel troops with his ability to keep a cool head under fire and complete his missions with minimal resources.  (Taken from the figure's packaging.) 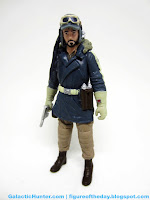 Commentary: We don't know why we should care yet, but here's a better looking Captain Cassian Andor.   The vehicle pack-in has a cool jacket, this one is in a swell parka with a better head design.   At first glance, it looks like a pastiche of Han and Luke's Hoth outfits.  It looks like this at a closer glance, too. 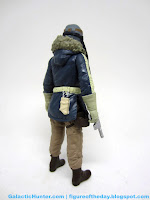 Much like Jyn Erso looks like a pastiche of 1970s lady movie stars and modern lady action heroes, Cassian takes the shortcut by putting on a jacket that's kind of like Han's with pants and a hat (with scarf) that are kind of like the old Luke figure.   A pistol fits easily in his holster or his hand, and the outfit itself has pretty good deco.  If you like such niceties as ornaments on a glove or a belt, this is your figure.  Multiple elements on his head are decorated too - a scarf, goggles, lenses, scruff, and a nice clean paint job on the face make this one of the better figures in the line so far.  I'm not crazy about snow/rain figures in theory, but this one looks nice.   Lots of creases and folds in the costume are nicely brought to life, and you'll note the fuzzy hood on the jacket too.   When you get in close to the gloves and squint, you'll notice some amazing fine detail that I'm just not used to seeing on figures of this size.  With only 5 joints, it's an impressive figure that cuts a notable presence on my desk.

His accessories include a silver-painted blaster that looks pretty cool and a zipline you can set up on your desk.  I had Cassian hanging around for a few days with no problems, and while the rope is short it was long enough to hang around in my office.   I doubt it'll be used in the movie and look exactly like this, but it's good enough to be marginally worthwhile. 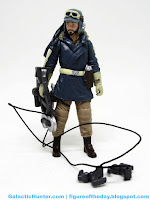 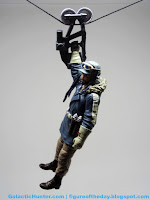 If you can get your hands on this one, do so.   Maybe we'll see a better version later, but as the sculpt goes it will be tough to make a nicer one.   I wouldn't have minded having leg joints unrestricted by a "skirt" piece, but at least this figure appears nicely.  He can sit, he can stand, and he's really sharp.   This is a figure that looks like he should have a specific vehicle dedicated to him, but at this time I don't know what that would be - or if I already have it.   He looks like he'd be right at home on a Tauntaun.