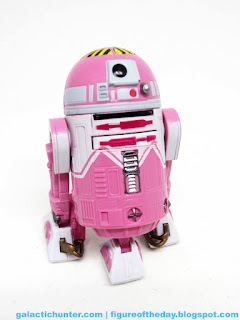 Bio: QT-KT, often referred to as Qutee, was an astromech droid and a member of D-Squad during the Clone Wars. She belonged to Jedi Knight Aayla Secura. (Stolen from Wookieepedia.) 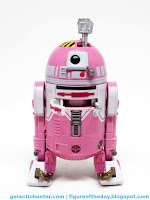 Commentary: Here's a good one.  The notes to make the Entertainment Earth went through many revisions before being sent off, but QT-KT was a droid I just had to have.  OK, I wanted to have all of D-Squad because I loved those episodes, but this one made sense for a variety of reasons - not the least of which was the fact we've only had one other pink droid, and it was a) a convention exclusive and b) highly coveted by fan members of the 501st Legion.   It's expensive - so what are you to do if you just want a pink droid?  Well... I guess the boxed set is about the same price as just R2-KT.  But at least it has 5 more droids in it.

Crafted in "movie" style using the Vintage 2010 R2-D2 mold, you'll notice that she has a sensorscope that pops up when you push in the central leg.  She has the same articulation as the other robots, so really she's interesting only for her colors.  This is the "upgraded" version of the droid, as you can see with the yellow and black stripes on her dome.  If you watch the episodes, you'll note that they spot these colors after they get their new parts and pieces.   Because I wasn't entirely sure if R2-D2 himself would appear in the set's final cut, the markings seemed prudent for D-Squad.  I hope they also lead to demand for the other members down the road.  Also she's a shout-out to a friend because of the color.

Her deco is great - molded in pink, she has a nifty jagged pattern down her torso with magenta markings on her opening arm compartment.  There are some great paint jobs in the set, but this one is probably tied with Ziro's droid as the most detailed.   It's a great figure for fans of the saga - doubly so if you loved D-Squad's adventures like I did - but my sample has a slightly loose sensorscope.  As such, be wary that there's always a chance it could - or could not - slip out if the droid falls over.   Caution is advised, but she's just fine when she's sitting on a shelf.  Hopefully she'll be joined by her squadmates some day, but I can tell you that I know of no such plans to make these happen any time soon.  Disney, this one's in your court.