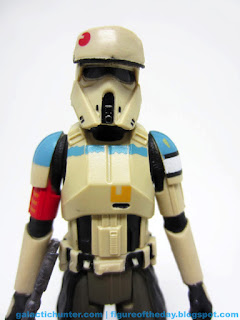 Bio: Specialist stormtroopers stationed at the top-secret Imperial military headquarters on Scarif, Shoretroopers patrol the beaches and bunkers of the planetary facility.(Taken from the figure's packaging.)

Commentary: Why Hasbro put multiple versions of the basic white Stormtrooper out and so far has kept the Scarif Stormtrooper Squad Leader confined to a 2-pack is beyond me.   New troopers are always a little tough to read with Hasbro, because this is a clear winner - one with variants that don't have figures yet - and he's not being sold individually in a commander or troop form in the first two (possibly three) waves.  What a missed opportunity - it's a lovely figure and along with the Death Trooper, these are the first new on-screen movie Imperial troopers we've had to army-build in quite some time.  But enough about that - how's this one? 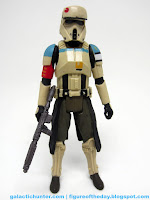 Apparently the Empire's budget on specialized troopers was spent on other worlds we didn't see - color beyond white or black was rare in the original trilogy, so now we've got a trooper with sand colored armor and blue shoulders which suggest a sky and a couple of red dots that could be a sun, or a planet, or a moon.   It's really nice from a design perspective, with little hints of wear and tear plus the kama molded to the legs so the figure can actually sit in a vehicle.  The helmet feels like a variation on existing designs - Return of the Jedi's Biker Scout lives in the mouth and visor, while The Force Awakens' TIE Pilot can be seen in that forehead visor a bit.    The arms are very similar (if not identical) to typical Stormtroopers, but you'll see more bits on the legs, with soft thigh armor and unique shoes plus a new body shell.  The "OII" design can be found on the new Death Troopers, but is absent from the Scarif Stormtrooper armor.

A new weapon awaits you - a beefed-up rifle that appears vaguely like the original Stormtrooper blaster on steroids, cast in a bronze color.   It's not bad - it won't impress anybody, but it's certainly nice to see something new and different from the Empire's arsenal added to its troops.

You should buy it.  Moroff is great - but this is great too.   I don't want to troop-build Moroff, but I think he's a figure every old-school fan might want.  The Shoretrooper Leader here is pretty swell - the color on his armor changes a bit depending on rank - and maybe more, we'll see - but this is a decent figure.   You'll be glad you did if/when the other flavors are available.   I'm looking forward to seeing just how many legit new trooper and pilot variants Disney can come up with... and how long it will take Hasbro to give us them all as toys.