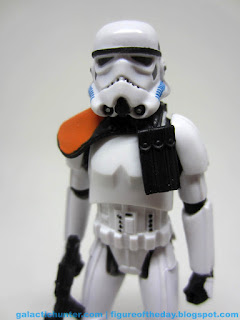 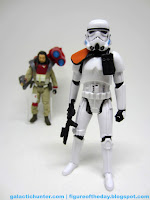 Commentary: I thought I knew what I was going to write about this Imperial Stormtrooper, but since this one was from a 2-pack and the single-carded Stormtrooper [FOTD #2,284] was from China, I assumed there may be differences.  And indeed, there were.   Minor changes to the sculpt and deco set apart what I assumed would have been the same figure in two styles - you'll want both.

First up: deco.  It's a 5-jointed Stormtrooper with an added pauldron, sure, but there's more to it than that.   The white is slightly different.  The figure has 9 painted black dots on its abdomen, while the single carded releases have none.  The back of the helmet has painted grey trapezoids, while the single carded version is bare white.    The blue vents on the helmet don't seem to be painted as evenly as the single-carded figure, though, so it's not a complete improvement - but overall, it's a little better to look at.  (Plus it has Baze Malbus in the box.) 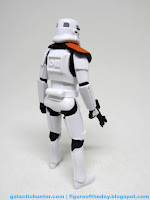 The sculpt is similar, but the stance is a little different - it has a slightly wider stance with knees bent ever-so-slightly.   The paint is a little better overall, there's a little more silver in the mouth vents, and for those of you who are very old - I bet you know why it's awesome.  Back in the 1990s, we had little reference to distinguish Stormtroopers from Sandtroopers - or even officially official names for the figures which would become Sandtroopers.  (Sometimes they were Desert Sands Stormtroopers.   Not no more.)   As such, the early custom Sandtrooper figures you'd see in comic and collector shops were usually just a Stormtrooper with a shoulder pad - and sometimes a backpack, but not usually.   It's the Sandtrooper as you probably remember it if you're old.   If they ever blow these 2-packs out cheap I'll buy 'em up just to take the Stormtroopers.   This is an army builder that's worth your while.   This is the Stormtrooper you wish you had for your Patrol Dewback back in 1979.