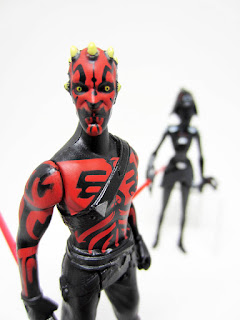 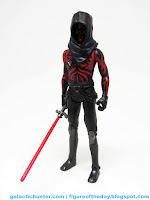 Commentary: After his two-pack companion figure, Darth Maul looks good by comparison.   Perfection is a request I don't think any of us expect from Hasbro, but there are certain minimal considerations that would be helpful when getting a new figure.  I love the sculpt, the deco, the design.  Hasbro did another good job giving me a figure that looks good.  It can stand... just not with his ridiculously unbalanced backpack rocket launcher.   Two big rockets, springs, and switches all on his right-hand side are going to throw his spine out of alignment, and it's going to mean you'll need some sort of aftermarket display stand to keep him upright.

This is a good toy of a figure from the TV show.  He's sculpted nicely, with good paint and enough details that you won't feel that you got shorted. He's got gloves!  A bandolier!  A removable hood that actually fits well!  Hasbro did a good job with the figure itself, and even the eyes look pretty good given how much paint is going on in there.   Without considering accessory compatibility, Hasbro really knocked this one out of the park. 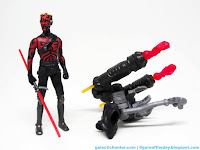 Holding his lightsaber is a little tricky, as the accessory's durometer doesn't mesh super well with that of his fist.  (Stiff tight fist with thin/flimsy bendy accessory equals frowny face.)   You can get it in there if you glide it down blade-first, and the hilt seems very thin where it touches the red bits.  It's also striking to note that Hasbro continues to leave off the flared base, which were basically standard issue since late 2001.  Except on Qui-Gon Jinn.  Look it up.  I love how perfectly the rubbery hood fits, and he has no problems wearing his backpack.  Standing with it, that's a challenge.  But he can absolutely wear it, no question. 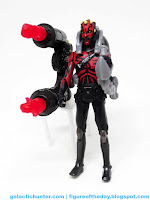 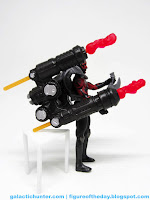 I will say the backpack rocket launcher mechanism is clever and works - I've seen similar things in Playmobil.  There's a groove on the backpack that actually easily glides when you move his arm on the controls.  It's almost magical - but since you're not going to be able to have Maul standing when you do it, it's functionally not particularly valuable.   You could just aim the rockets.  I'll say I'm really amazed that Hasbro pulled it off, though, as it is sort of magical seeing it actually work.  The rubber-tipped rockets launch a good distance, and have some weight to them as they fly across a table or small room.

Of this set, Maul is the clear winner.  I really dislike the decision to give him a weapon which prevents standing, but at least it looks neat.   And at least the mechanisms all function.  It doesn't look like Hasbro left anything on the table here, so know that you can buy it and you can enjoy what I assume will be the best/only season 2 Rebels Maul that we'll ever see in action figure form.