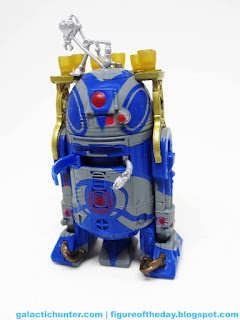 Bio: R2-C2 was a purple and grey R2-series astromech droid serving the Hutt crime lord Ziro Desilijic Tiure at his palace on Coruscant. It primarily served as a drink trolley at the palace's bar. Along with its blue coloring, it had a red Black Sun symbol on its back. On its right leg, text written in Basic is visible that says "Ziro," indicating the owner.  (Stolen from Wookieepedia.) 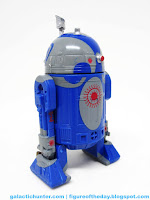 Commentary: I liked this one.  Along with Jabba's Bartender, R2-C2 was a robot I just had to have.  Part of the reason was that it shared a mold with another bartender droid - why settle for one when you can have two for twice the price, right?   There was some weirdness with the name (which I believe was RC-C2 on some paperwork) so there were more than a few references to RC Cola in the marketing. (Also, I like RC Cola.)   This droid was in The Clone Wars movie as one of Ziro's stooges - and one of the most nifty examples of coloring outside the lines you've ever seen.   I loved the idea so much because it's the kind of designer thing I've been wanting to see for years - I was hoping to put out blank white astromechs as an exclusive in the '00s but such a thing was "against the spirit of the brand" at the time.  Oh well.  At least we're getting some fancy weird designer droids now under Disney, although I'd say Ziro's drink dispenser out-weirds them all.

Hasbro did a great job translating the animated design to the "realistic" style of the movies.   Ziro the Hutt doesn't yet exist as a figure, but if and when he does get to see plastic at least you've got a few of his robots ready to go.   The figure is about half grey and half blue, liberally covered in an even, thick coat of grey.  Red spot color brings him to life with eyes, projectors, and of course Black Sun tattoos!  I believe this may well be the first (or only) astromech droid to feature any sort of faction markings in the world of toys.  Considering how partisan a lot of the hardware looks in Star Wars, it's kind of surprising more robots aren't marked with the political leanings of their owners. 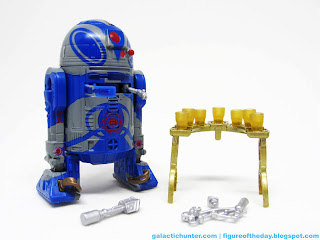 Each glass is completely removable and the figure is outfitted with an opening chest compartment with a flip-out arm. The compartment's ability to close seems to vary from sample to sample, so you may need to do some customizing to get it to fully close.  Or if it's closed when you get it, go ahead and leave it that way.   It was my hope that this droid set would be ultimate 2016 buy for the pre-Disney-era fan who has everything, although there were numerous challenges when it comes to making something for everybody.  I hope you like the set, and I also hope Hasbro has more up their collective sleeve for additional super-articulated exclusive figures and figure sets from the original six movies and older television shows.  It's still a rich universe with lots of amazing stuff - and I hope the dollars make sense enough to continue to wallow around the alleys of Coruscant and the palaces of strange far-off worlds.   And if they don't go there, well, we got Ziro's custom robot drinking buddy.  We'll always have that.   Can you think of a better eggnog delivery mechanism?

Collector's Notes: I got mine from Entertainment Earth, where it is an exclusive.   I work there and was heavily involved with this exclusive... so please do buy a set.  Also, I need a break!  We'll be back after I see the movie.