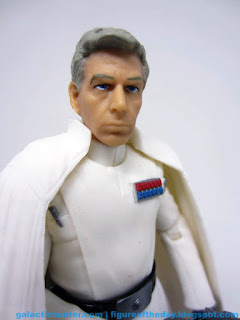 Bio: As director of Advanced Weapons Research for the Imperial military, Orson Krennic is obsessed with the completion of the long-delayed Death Star project. A cruel but brilliant man, Krennic has staked his reputation on the delivery of the functional battle station to the Emperor. (Taken from the figure's packaging.) 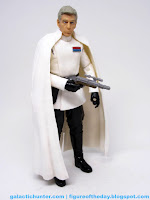 Commentary:  In Rogue One, Director Krennic is under Tarkin and Vader but seemingly above pretty much everybody else.   His outfit looks a bit like that of Yularen, with a cape - and capes aren't super common in Star Wars.  I'm not sure why he has one - I mean, Tarkin doesn't.  But Lando does... and so does Tessek.  Are they chilly?  Is it to help keep the white uniform clean?  Is it just because it looks cool?  I have no idea. 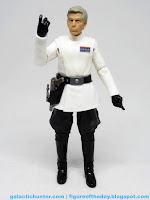 This is the first "Imperial Officer"-type figure in this line, and I hope it means the door is open for Tarkin or at least one more at some point in the neat future.  The traditional tunic, boots, and gloves are all here as is a new blaster which fits nicely in the new holster.   Unlike most Imperials, Krennic actually uses his blaster in the movie - I can rarely picture a major officer ever actually shooting somebody or even having a weapon on which to draw.  Everything basically looks right - he's got a grey gun, black gloves, shiny black boots, a silver belt buckle, and a little bit of snow on his hair.  He could stand to have more.  The skin tone is better than a lot of other human figures as of late, as the flesh looks a little less waxy than some. 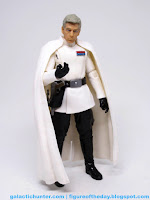 With over 25 points of articulation, I've not yet tried his waist joint - I've been advised it's a little fragile, so I don't much feel like risking it.   The cape covers the figure nicely, and renders the articulation mostly moot - it's nice to have double-jointed knees, but will you ever actually use them given that the skirt of his tunic restricts movement?  Probably not.   The extra parts here add cost, and while functionality is built-in it's not particularly useful or aesthetically pleasing.  We're getting to a point where Hasbro could probably cut costs by running a secondary assortment of figures that don't need to be fully posed, maybe statues from the waist down that could bring down the prices significantly.  I wouldn't be too upset if they had a discount wave, not unlike the Big Lots!/Family Dollar/Dollar General figures when less "action" is called for.

With the abundant articulation, good head sculpt, and expressive fingers, Krennic's a figure that any Imperial fan is going to want.