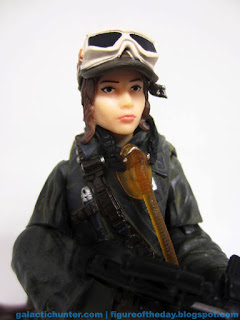 Bio: A highly skilled soldier in the Rebel Alliance, Sergeant Jyn Erso is an impetuous, defiant warrior eager to bring the battle to the Empire. Jyn has little patience for debate within Alliance high command, enough so that she takes matters into her own hands. (Taken from the figure's packaging.) 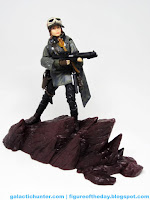 Commentary:  Hey kids, it's another Jyn Erso!  Hasbro anticipated that people might actually want to buy the heroes of a movie regardless of who they are, so we're getting more than a few this time.  (I'd say releasing three 6-inch packaged versions of her same Jedha outfit is too many, but I digress.)   This one mixes things up with new accessories, a swell poncho, and a giant rock.  Who doesn't love a nice rock?

With nearly 30 points of articulation, Hasbro did a great job here - the legs have all sorts of great surprises like boot cut joints, the hands have bend-and-swivel wrists, and you've even got a breathing mask.  I don't think she used it on-screen, but you do get her cool baton which can hang off her poncho.   Her blaster can be stored on the belt, and the helmet fits perfectly on her head.  I didn't even realize it was removable at first.   It all fits together nicely, but it's quite dark and murky.  This is realistic and sensible for rain costuming for a war movie, but as a toy shelf goes it can get a little bland.  It's the perfect pastiche of new and old Rebel gear, but it blends in on my desk a little too well.  The two-tone poncho is divine, the face deco is exquisite, and in the immortal words of Carrie Fisher, "it's a hat." 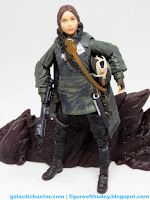 The rocky Eadu base looks like it should connect to something, but what? And when?  It wouldn't surprise me if a trooper, a Galen Erso, or a repack of Cassian came out later to connect to the rocky cliff base.  I hope this doesn't happen - I'd rather get something new.  It's brown, it's dark, and she has to stand awkwardly to be posed on it.  It's a nice accessory, but if it had been left out I doubt you'd miss it.  The snow Starkiller Base bases didn't do anything for me either. 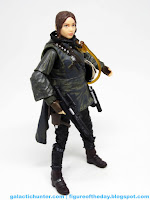 As the first time Kmart got a figure exclusive that - so far - seems to actually be exclusive, this is pretty cool.  The extra pieces and weapons help to soften the $5 upcharge, although the Kmart-ness of it makes it a hassle to get - after all, they seem to be closing more every year.  Since the costume is unique to this set, I've got no reason to skip it - it's cool!  It doesn't break any new ground, and my expectation is that Hasbro will continue not really doing anything amazing in this space for quite some time.  It's good though - but until we see new features or materials deployed, all you need to know is if the deco and articulation are any good.  And they are.

Collector's Notes: I got mine from Kmart.