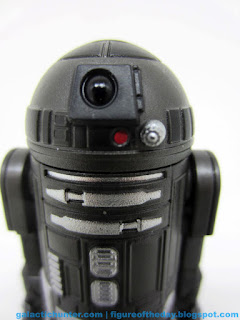 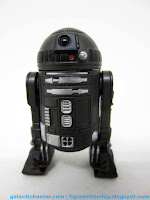 Commentary:  Just different enough to be interesting! Despite the expensive price of entry, completists will want to somehow get the C2-B5 from Hasbro.  Unlike the Disney C2-B5 [FOTD #2,295], this one has a much simpler build and a different paint job.  Given how I treat droids and troopers, this is different enough for me to see it as a different figure, and as I never saw either in the movie (so far) I can easily make that leap in my collection imagination.

You've seen this mold before at least twice, and I hope you'll see it again.  This is the cheaper astromech mold we've seen used for R4-P17 and R2-D2 from a few years ago, as only the dome and arms swivel.  There are no third leg or gimmick here, but the deco is interesting - and as we now have hundreds of variations on R2-D2 and other similar robots, I can do without all of them being super-duper-poseable.   Granted, at $300, it wouldn't hurt if it were.   Everything moves well, but where it really sings is the paint job. 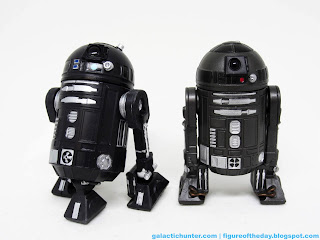 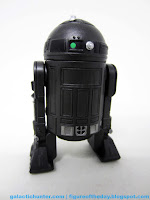 Rather than a glossy black like the Disney version, C2-B5 now has a gunmetal grey dome with darker grey panels and markings.  The silver parts are still silver, but the Hasbro version changes up the little boxes on the side of the dome to be painted black, and the blue dot under the eye is now red.  Disney's silver around the arms is gone, and the feet are also lacking much of the silver.  The red light is also missing from the back of the dome - but again, this helps the figure to look fairly different from his counterpart.

Supposedly it's on Scarif and I'll need to keep an eye open.   Odds are you missed this figure too, and given that there are a great many black astromech droids now you don't even need to get this one necessarily.  You've got options, unless you're bonkers for completism like I am.   If you see the AT-ACT cheap, get it because you'll want the figures and probably get some amusement from the smartphone compatibility.    Since Jyn is nothing special in that set, it's an expensive buy that doesn't offer a ton for the money especially when you see what $300 can get you.  Like, the complete Hasbro action figure line for this movie.  Why this droid got so much marketing I don't know, as Lucasfilm seems fond of picking an obscure character and making something of it from time to time.