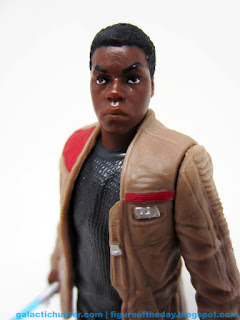 Bio: Finn's conscience and desperation to escape his stormtrooper past propel him down a heroic and dangerous path when he faces off against the formidable Captain Phasma and the First Order's legions of troopers during a devastating night raid on Jakku.  (Taken from the figure's packaging.) 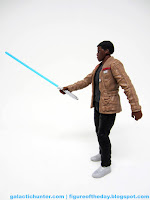 Commentary: As with Captain Phasma, this Finn is pretty much just different enough to make you mad.  It, too, was cranked out in Vietnam with a different set of tools, meaning it looks different.  At first glance it's the same except his accessory - the blaster has been replaced with a Skywalker saber complete with hilt loop, but to the trained eye it's different.  Very different.   The 2015 Finn figures were made in China. 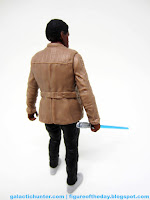 The first thing I noticed was his coat - it's now darker, a richer brown.   It's less faded, less light.   The undershirt is a lighter grey, with a different texture.   The legs seem closer together, cut slightly differently, and able to swing forward a tiny bit more.   His skin color is darker, the face seems a little sharper, and the hair is a smidgen less fluffy.  Oh, and it looks like his pants have a sculpted zipper - but that could just be a flaw of the molding process.   You'll also notice the copyright stamps are different, with a new country of origin. 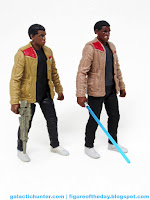 Since there are minor differences to the sculpt, deco, and accessory, plus the factory, it would seem this is a new mold rather than a repack.   It seems cast from the same digital files, interpreted barely differently by the person in charge of the tooling.   Given its lightsaber accessory (and curious on-package bio) it's a worthwhile curiosity for collectors who are after it all - but we've also had a ton of jacket Finns by now, and this variant may be one too many.   I would argue it looks better than the other ones - but if you already got the super-articulated one, you probably neither need nor want another.   Recommended if you don't have a Finn (or Phasma), or if you need all the variations. 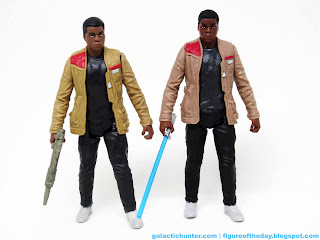