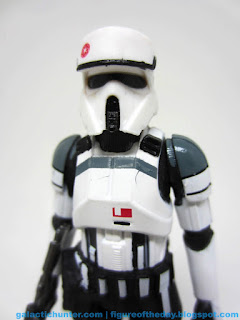 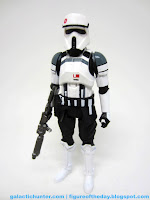 Commentary:  Disappointment.  I know a lot of people were dumping on the AT-ACT even before it came out, because it was expensive.  Now that I have one in hand, I can tell you that it's a disappointment.   One of the reasons is the AT-ACT Driver, as he can't sit.  I'll let that sink in - for the first time possibly ever, Hasbro has bundled a vehicle driver with a vehicle wherein the figure cannot actually sit to fit in the vehicle.  I know some can stand in the driver's area, and that's OK, but this is a one-seat walker.  It's smaller (not larger) than the traditional Kenner and Hasbro AT-AT vehicles too, so really all Hasbro had to do here to make this one acceptable was to make it sit.  The rubbery skirt piece is small and thick, stiff enough to hinder the legs from swinging forward more than a few degrees.  At press time, I don't have the normal Wave 3 Scarif Stormtrooper which seems to share this mold - so I don't know if this problem is unique to the driver or not just yet. 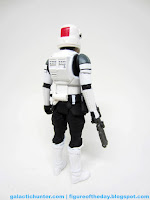 Having said that it fails completely at its mission, it's a nice-looking, well-sculpted, and interestingly painted action figure.     I hope Hasbro tries again.   The figure is effectively the Shoretrooper cast in off-white with grey and white shoulder markings, complete with the red dot on the visor and a new red dot on the back of the helmet and a nifty design on the chest.  The good news is Hasbro could make another one, better, using the Walmart exclusive Scarif Stormtrooper body.  Let's hope they do.    The grey stripes look great against the almost white armor, and I love the belt pattern.  The coloring recalls concept art quite nicely, and the gun fits in the figure's hand without a problem.  The blaster is this almost-perfect silver color, and I hope we see it used on more accessories down the road. 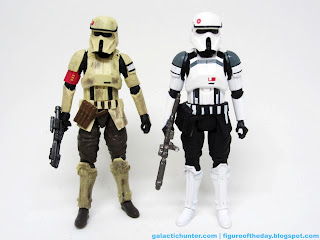 He has 5 points of articulation, 3 of which are worth anything.   The head and arms can move perfectly, the hips cannot.  Anyone paying over $100 for this set are going to feel an air of disappointment, and given that it was $300 I'm sure figure completists are fuming over the high barrier of entry to this driver and a lesser C2-B5 than you can get at Disney theme parks.   While I'm happy to be complete as loose figures go, and this figure will look good on a shelf - where it will ultimately live - at least my sample is a garbage toy.  It could be better and should be better, and hopefully this is just growing pains on a new team or factory.   We've had figure/vehicle compatibility issues since 1995, but I'm unable to name any time a figure was bundled with its vehicle from the get-go having this specific issue.   The good news is that Hasbro's The Black Series program at Walmart affords them an opportunity to make good with minimal investment and maximal sales potential.   I hope they consider it, because I'm not going to be remotely happy until they do.

I just got mine today ($150.00) and, I don't know what the deal is with yours, but my driver figure sits in the cockpit just fine.The problem I have is the phone app cant find the AT-ACT. I have to use the buttons on the vehicle.