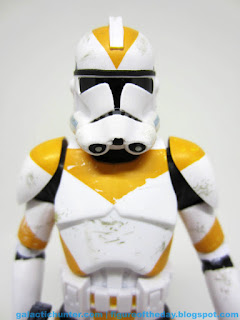 Bio: These clone troopers served with Jedi Master Obi-Wan Kenobi in the Grand Army of the Republic's 212th Attack Battalion during the Clone Wars. (Taken from the figure's packaging.) 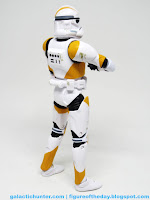 Commentary:  Hello there!  The Phase II Revenge of the Sith Clone Trooper mold was also decorated as the spiffy  212th Attack Battalion Utapau Trooper, complete with the dirt and scratches you love.   The figure has the same great articulation, a small blaster pistol, and great deco.  Heck, you probably even know what to expect - but let's run it down anyway. 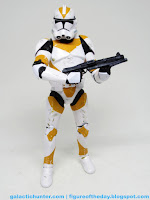 The white Clone has now been given a unique paint mask - the green clone and orange clone have similar designs, but completely different white scrapes in their squad markings.   The orange looks fresh, as do the scrapes - which show exposed white plastic underneath.  Added dark scrapes imply dirt or wear and tear, with a healthy smattering on the figure's front.  Even the helmet has been kicked around a bit, which helps it look distinctive and interesting.  I was even more surprised to see Hasbro spent some effort marking up the back as well, as historically this has been something Hasbro wouldn't touch.  If you don't see the damage in the window box, Hasbro would often leave it off - so this is a huge improvement over some older designs. 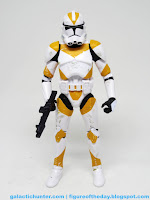 The design is based on one of Hasbro's finer earlier figures, so you get double-jointed elbows, bend-and-swivel wrists, and a good range of motion that allows you to hold a gun with one or two hands.  Some newer troopers can't necessarily do that, but Hasbro is getting better at making simpler elbows with better ranges of motion as of late.   If you like Clones, and my math says some of you do but not as many as one might hope, get this figure and/or set.     The only thing missing would be more weapons and even more variety, but I like what I got and I think you will too if you're in to prequel figures.  After all, there aren't many.