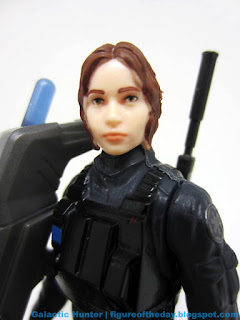 Bio: On a mission to infiltrate a heavily guarded military complex, Jyn Erso disguises herself as an Imperial ground crew worker, concealing her identity under coveralls and a blast helmet.  When circumstances demand it, she can turn her marshaling wands into swift and silent combat batons.  (Taken from the figure's packaging.) 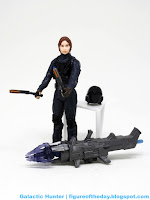 Commentary: Another Jyn Erso!  This one comes in the Imperial Ground Crew [FOTD #2,283] disguise, and as far as I can tell they share the same body.   The neck pegs seem to be the same size, and the hands and shoes are also seemingly identical.   Jyn's boots are brown, the Guard's are black.  Jyn has fingerless brown gloves with painted flesh fingers, while the Ground Crew has black gloves.   Other deco differences are minimal, but you'll notice two on the body.  Jyn's neck is flesh colored as opposed to black, and the backpack on Jyn has two very small red lights painted on the back that my Ground Crew figure lacks.   It's a nifty reuse of parts and pieces.

The disguised Jyn Erso is a fantastic figure - it's just as good as the Ground Crew but has the added bonus of a rocket-firing gun that's too heavy for her plus a wonderful head sculpt with a really nice paint job.  (Warning/guarantee: few action figure heads this small hold up to scrutiny under bright lights and a macro lens.)  The batons are pretty much the same, and the helmet lacks the open eye area we got to see in the movie.  I'd love to have seen that open window, but oh well.  At least you can use this figure as an army builder or infiltrator on the playset some customizer will undoubtedly make for you at some point. 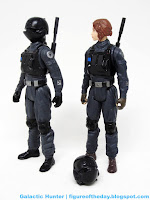 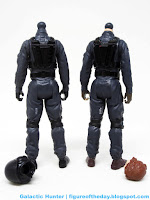 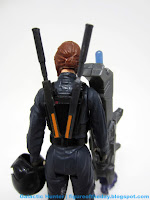 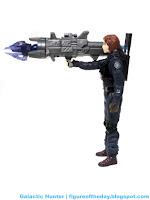 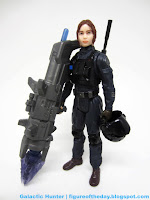 This is a great example of foresight on Hasbro's part, squeezing two figures from a single mold with just a bit of planning.  I think.  If they're different molds, they fooled me so far.   I'd love to see them do the same with an Imperial Officer Cassian Andor some day, but for now I'm going to be very happy Hasbro made Jyn in the disguise.   It seems movie windows are getting shorter and shorter in nearly every brand and license in the Hasbro catalog, so seeing three or four waves of figures and rarely do we get this much variety in costumes of a movie's hero in this short of time.  Seriously - we got four different enough to be interesting costume changes for Jyn!  That's pretty wild.   So far I've only seen her show up online, but if you see her in stores go grab it.  It's cool.  Heck, order it online if you dare, it's cool.

The Imperial symbols on the shoulders of the Jyn figure are incorrect. The ones on the original ground crew figure look more accurate.