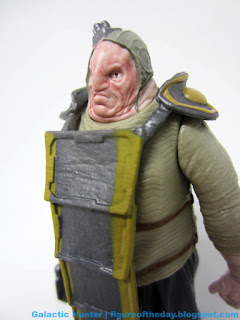 Bio: The junk boss of Jakku, Unkar runs a profitable business stealing, scavenging, and selling scrap on the desert world. If defied, he calls upon his gang of desert thugs to take what he wants.  (Taken from the figure's packaging.) 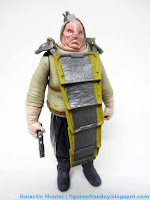 Commentary: I sat on Unkar Plutt for a while - he's been on my desk for months, and I want to move him to his new home.   This is a really neat figure, mostly because it incorporates some fun features.   For starters, you can rip his arm out of his socket - this is most likely due to a scene that was actually shot where Chewbacca, uh, disarms him in a fight.   You can replace the arm with the "Cobmine" weapon - a larger claw that just happens to exactly fit the missing limb's footprint.   It's the kind of classic Kenner thinking that's brilliant and wonderful, and I hope we see a lot more of it.  There's a problem, and a solution - and you can also use the claw to put together some dumb tripod rocket launcher thing that looks like a bad high school art class "found object" sculpture. 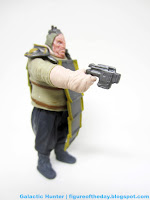 The figure itself is pretty good, it looks a bit like the movie.  The blobfish who surfaced too quickly is big and pink, but not hugely tall - in the movie he's not exactly huge either.  Much like Jabba the Hutt, he stands higher than others behind a desk so size comparisons are tough to suss out unless you see the aforementioned deleted scene where he's basically the same size as Rey.   The texture on the skin and shirt are great, the bizarre armor plate is good, and the colors are basically as good as you can expect from Hasbro's encheapened figure line.  Thanks to the removable arm, he has six points of articulation. 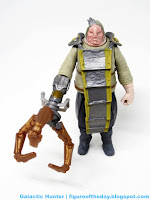 You may disagree, but I think this is one of Hasbro's better executed figures.  The armor that rolls down the front of his body is nice and flexible so he can sit with it.  The legs swing forward and unlike many corpulent plastic gentlemen his legs don't have a v-crotch.  The armos swing forward nicely, and it gives us something Simon Pegg probably always wanted - a Star Wars figure of himself.  And residuals.   Presumably.

The plug-in arm is cool, and has three jointed claws.  You wouldn't miss it if Hasbro left it out, but it's a far more interesting accessory than most of what we got for The Force Awakens.  It's not the most Star Wars-y thing ever, but it serves a function to this figure specifically, building on a (deleted) story idea.  Unkar Plutt will probably have both arms when he appears next time, but I have to say I appreciate Hasbro giving kids a way to play out the (again, deleted) scene and also put him back together again so he can still play.   The figure was designed prior to the film's release, so it's sort of a deleted scene figure - just not intentionally.   He was a slow seller in 2016 and he's starting to vanish - get him if you still can, he's swell.