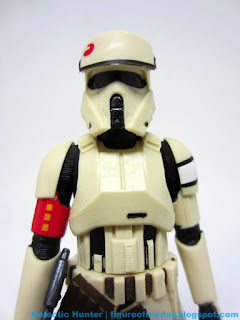 Bio: Specialist stormtroopers stationed at the top secret Imperial military headquarters on Scarif, these Shoretroopers patrol the beaches and bunkers of the planetary facility.  (Taken from the figure's packaging.) 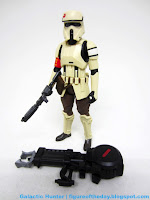 Commentary: Often sold as Scarif Stormtroopers, this figure is interesting because the packaging says Shoretrooper on it.   It's strikingly similar to the Imperial AT-ACT Driver [FOTD #2,330], but it's not the same mold - the Shoretrooper is actually good.  It's better than the driver, which hurts given the driver was a lot more expensive.   Walmart's The Black Series Scarif Stormtrooper [FOTD #2,328] is best, but if you're building an army you'll want a couple of these too.

Why?  For starters, a different blaster - the super-articulated version has a small blaster, while this one has a big rifle.  It's different, and mixing and matching makes a display happy.  The Shoretrooper is also clean - Walmart's figure has dirt and battle damage.   Walmart's also has the best articulation you could ask for from a trooper, while this one only has 5 joints.  His arms and legs swing forward nicely, give or take the "skirt" piece providing minimal blockage to the leg movement.  I love the ball-jointed neck, and the various rank markings are crisp and bright.  This is a nice figure with painted ammo pouches and largely great decoration. 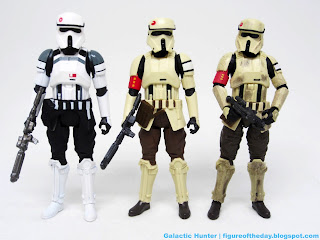 His alternate weapon is a big, goofy clawed weapon.   I'm honestly not sure what I'm supposed to do with it, as it's kind of short and really strong.  If you pull it out, it'll recoil unless you're gripping the other end.   The string has a claw on the end which, I guess, if you had three hands you could play with in a meaningful way by wrapping it around someone else's hand.  It's too big for the figure to hold and stand without creative positioning of his feet, and it's not in the movies.  I assume these things tested well, but man, I just don't love 'em.     If it had some sort of button to allow the string to remain extended and retract when I release it, I'd love it.  As it is, it's just kind of annoying.  I've seen better.  (The same kind of winch toys were used in Kenner's 1990 Batman figure lines to much greater effect.) 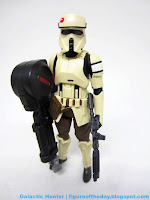 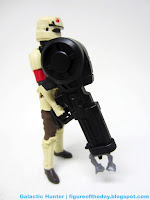 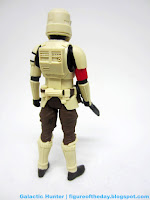 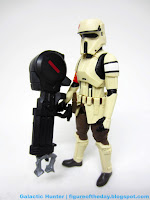 You won't see this figure in stores, most likely because if I see it first I'll buy them all.  They're nice.   I haven't seen this wave anywhere other than online stores yet, so you know the drill - get it or regret it.   This is probably the one you're going to want to army build if you want something clean, so... good luck with that, kiddo.  I'll be happy with my one.

I still don't get this figure. He's cool enough. But, I'll take a Death Trooper over him any day of the week.

In the words of Seymour Skinner, "No, it's the children who are out of touch."