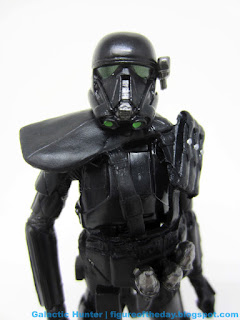 Bio: The elite soldiers of Imperial Intelligence, Death Troopers are encased in specialized stormtrooper armor with a dark, ominous gleam and serve as bodyguards and enforcers for Director Krennic.  (Taken from the figure's packaging.) 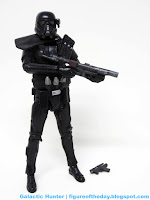 Commentary:  Yes, another Death Trooper!  If you're collecting all of the unique versions, I believe this is one of four 3 3/4-inch expressions of the armored trooper with the scrambled secret twin language.   Kohl's has a sandy redeco, Pao is packaged with one, there's this one, and a basic one appears in the third wave of basic figures.  Are there more coming?  I sure hope so - it'd be neat to build out an entire squad of six without resorting to buying duplicates. 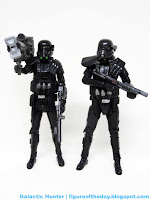 This is, in theory, the best Hasbro has to offer.  You get two blasters and no holster - the bigger one has a loop for the small pistol.  My opinion of this figure improved significantly when I popped off the head and removed the pauldron and various straps - it's pretty easy to do, and it opens up the figure's considerable range of articulation.  There are no rocker ankles, but it's pretty much everything else you could want.  Bend-and-swivel wrists are just some of the 28 joints.  I love how easy it is to pose him with both hands on the rifle, and the sculpting is on par with or better than the other, stiffer versions.  Having thigh swivel joints and enhanced deco - somewhat - help.

The rifle has a painted red mark on it, the removable bandolier pieces have some silver, and the bits on the helmet are a tad more reflective and shiny.   I can safely say it is quantifiably better than its peers, and you're charged accordingly.   This is the trooper articulation you want, with the only real hinderance being the belt - and you can remove the belt to fit him in a ship or something.  After futzing with it more, I'm kind of surprised it wasn't scooped up even faster as it's better than others would have me think.  Get this one and futz with it, you're in for a small treat even if the entire squad didn't get to be particularly cool in the movie. 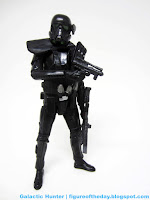 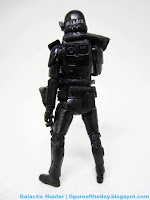 ...I better buy a couple more of these.