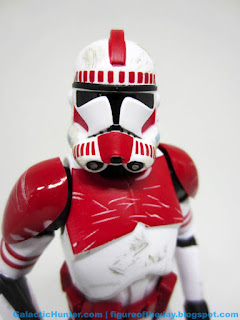 Bio: As members of the Coruscant Guard, a military police unit stationed in the capital world of the Galactic Republic, clone shock troopers were the elite soldiers of the Grand Army of the Republic during the Clone Wars.  (Taken from the figure's packaging.) 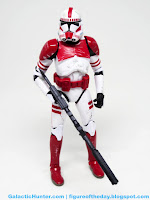 Commentary:  I'm not sure where the name change came in - to anyone alive in 2005, this Coruscant Guard (Phase II) was a Shock Trooper.   Perhaps the not-so-vaguely fascist imagery and verbiage deployed deftly by George Lucas is something Disney would like to play down?  I have no idea.   I'm just a caveman.  Your world frightens me with your flying machines.  ...but I digress.  What I do know is that this is a pretty good figure - I'm (pardon the pun) shocked by how great it is.   Hasbro didn't cut corners, molding the shoulders in a wonderful shiny red plastic and by both painting on and masking out battle damage. 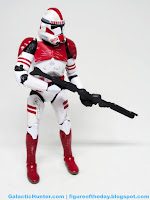 The white figure has a molded red belt, shoulders, and lower legs.  The same mold was used for 4 other figures so far, but with squad-specific detailing.  Here you get red rectangles and stripes galore, plus oh so much damage and painted soles on his boots.  What I'm the fondest of, though, is the battle-damage.   Hasbro cut little holes in the paint masks so that the bare white plastic would shine through on the white molded parts of the figure - so the paint is scraped away rather than faked.  Fake scrapes are painted on the red shoulder pads, because how else would you do it?  The helmet is given a few scrapes, and the torso has some smudges and scuffs that are easily some of Hasbro's finest work.  Even the hands have some dirt - Hasbro went all-out painting this one. It's superb. 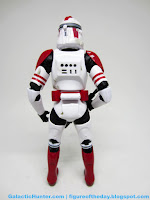 Since you've seen this mold before, you know it has double-jointed elbows and knees.  You know it has about 29 points of articulation and has no real problems holding a blaster.  I wish there was a solid Darth Sidious to go with it, but maybe we'll get that later.  Someday.  When Disney and Hasbro are willing to admit there was more in the prequels than Clones and Qui-Gon and Darth Maul and Jango Fett.  Due to the nature of what this product is, a redeco made good sense and Hasbro did a phenomenal job delivering something with higher than high quality standards.  Did people buy into it?  Well, sadly it didn't sell out - a shame, as these are easily the best-painted Clones I've seen.  I'll treasure them always.  If you got them, I hope you will too.