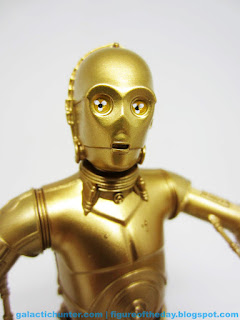 Bio: C-3PO is a droid programmed for etiquette and protocol. Over the years, he was involved in some of the galaxy's most thrilling battles and is fluent in more than seven million forms of communication. (Taken from the figure's packaging.) 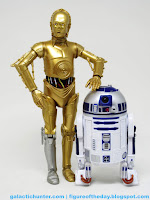 Commentary:  If you liked C-3PO you'll love C-3PO!   This version was exclusive to Walgreens, and had unique gold and silver deco while C-3PO [FOTD #2,323] from The Force Awakens had a red arm and was sold in to more stores. 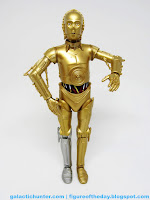 The base mold is pretty much the same - there were tweaks to the torso sculpt, but this all-purpose C-3PO for the original Trilogy era turned out pretty nice.  The gold is even, the articulation is good enough, and the silver is mostly where it should be.   As with the other release, the elbows aren't articulated and the knees are hinges which go forward and  backward.  Most 3 3/4-inch releases  aren't this good - but we expect more from these higher price points.  The bundle of wires on his belly is uniquely painted, but the eyes are pretty much the same as before.  The sculpt is still fantastic, and you get bend-and-swivel wrists with painted palms on the hands. 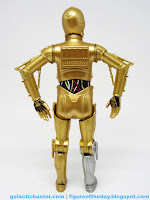 For what it is, it's OK.  It's not as nicely articulated as other figures in the line.  It has no accessories - a bag for Chewbacca, removable limbs, a droid caller, or just about anything would have been pretty nice.  This figure looks great on a shelf, and with other figures from the line, but if Hasbro just made it as part of the cheap 6-inch series you'd probably have been fine with that.  I'd love to see a vac-metal gold one some day, but I'm guessing that's unlikely as Hasbro has stayed away from doing many of those since 2010.  If you're already collecting this line, you'll appreciate that many of the details were sculpted on like the rod in the area near the elbow, or the three light dots around his eyes, or the familiar droid foot soles.  I'm sure there will be opportunities for snow, or dirt, or green slime redeco versions in the future but for now, at least, these two flavors of C-3PO are good enough to pick up.

Collector's Notes: I got mine from Walgreens.

This 3PO is too good for that horribly out-of-scale R2! I have mine with a Revoltech R2 and a SHF Luke and the 3 of em look smokey together.

How can it be considered "fantastic" without articulated elbows?

This was the figure I was always waiting for them to make, to get me into this line. The final product is... underwhelming. He just looks cheap to me, certainly not worth the price tag. So, guess I'll just continue not collecting the 6 inch line.

A sculpt can be fantastic with sloppy paint, underwhelming accessories, or poor articulation. The artisan still delivered a robot that looks like the robot should.

Yeah, I think it's the paint more than anything that gives it that feeling of "cheapness." It does the sculpt no favors when the paint does nothing at all to help it look good.

Did C3PO even have elbow articulation in the OT? As I remember, his arms were always bent...