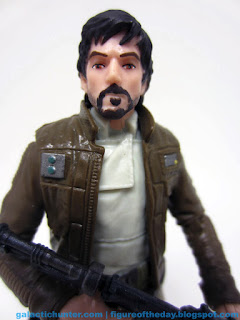 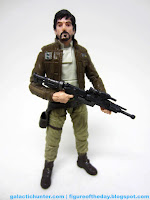 Commentary:  There are at least three ways to get a Captain Cassian Andor in his brown jacket, but only this one is super-articulated.  5-jointed versions are sold with the U-Wing or with the Toys R Us Cassian Andor and Stormtrooper 2-pack, but this one is sold boxed by his lonesome.   It's a worthwhile upgrade.  I liked the U-Wing Captain Cassian Andor [FOTD #2,282] enough, but it was a little goofier for whatever reason.  The 2-pack has better paint, and this one is even better.  It's not perfect - nailing facial hair seems to be Hasbro's new challenge - but the sculpt is good and so is his expression.

If you liked the improvements made to Jyn's articulation, Cassian is slightly better.  Not only does he have the mid thigh swivel, but he has bend-and-swivel wrists for a whopping 28 points of articulation - all that's left is for Hasbro to cram in double knees at this point, or perhaps a return to rocker ankles.  (Why those were left out, I'll never know.)   As with Jyn, you can swing both legs forward - but the holster is glued down.  This is good for people who stand/pose, but for sitting in vehicles it could result in breakage.  I advise caution.  I'd also love it if Hasbro could use a tab and a hole so you could pin the accessory in place, and un-pin it so the figure can sit.   But what do I know? 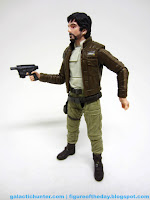 The facial hair is good, but not perfect - Cassian now has a goatee and some scruff.  It's not terrible, but it could be better.  Getting facial hair or any detail at this scale requires careful exaggeration or understating of certain features, otherwise dark things seem too dark or light things seem too light.  It's a perfectly nice action figure, but as many of us buy Hasbro products in lieu of busts or statues we have very high expectations.  I don't doubt Hasbro will find a better way to do this in the next few years, but for the time being I'd say get this one and repaint it if you have the skill.  I don't.  The rest of his costume is perfect, with the jacket represented as a "vest" that's a little loose with sleeved arms.  It's really wonderful.

Most impressive is his  blaster.  In the early hushed buzz days of this movie, we were being told how guns would be a big part of the movie and merchandising with fancy new features that would be great for toys. I think this got downplayed a bit by the movie, but thankfully Cassian's blaster does have cool features which made the cut.   The pistol fits in his holster just fine, and as an added bonus you can add a butt to it and a sniper scope.   It's configurable!  At this scale, that really impresses me.  The deco is good - Hasbro has done a good job on blasters at this scale - although there's nowhere for those extra parts to go if you're not currently using them.

I like this figure, but I'm fond of the costume - it's like Han and Luke's Bespin jackets.  I'd buy those pants.  I'd wear that jacket.   I'd probably swap out the Rebel rank pins with Iggy and the Stooges or Somerville Speakout, but it's a nifty costume and a great action figure.  I like this one much more than the other versions, including the 6-inch one.  Hasbro got the skin tone right for the size, and the deco is totally on the money.  Nice work, fellas and/or ladies.  We salute you.