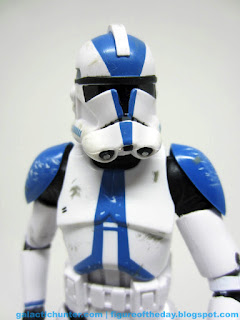 Bio: An elite unit of clone troopers, the 501st Legion patrolled the grounds after their siege of the Jedi Temple on Coruscant.  (Taken from the figure's packaging.) 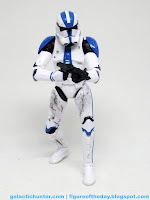 Commentary:  As I've mentioned before, I was both disappointed and inspired when I saw a plain white Phase II Revenge of the Sith armored warrior.  On one hand, it was boring - but that also meant that the 501st Legion Clone Trooper couldn't be far behind... or so I thought.   It turned out there were no plans for it in the immediate future, so here it is!   Because it's a trooper and a clone, Hasbro used the same body and helmet for five figures to date - the big changes are deco, and boy howdy are they some big changes. 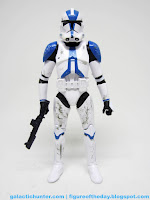 The pure white figure has been gifted a generous slathering of blast damage and blue rank marks.  Hasbro delivered a figure that's surplus to requirements, with molded blue shoulder pads that seem to match the painted stripes on his helmet, legs, arms, and torso perfectly.  Rather than just give you a plain version of the trooper, Hasbro pulled out all the stops to damage and scratch him up at the factory.  The blue paint masks are peppered with small holes and scrapes, allowing white plastic to shine through the squadron markings.  On the shoulder pads, white and grey paint were added to give the illusion of battle-worn acts of (I assume) heroism.  The helmet has a few scrapes on the front and back, while the arms and torso are almost clean - just a few scrapes.  The legs are amazing, with black streaks and smudges indicating that this warrior has seen some serious action. 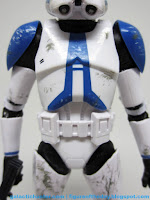 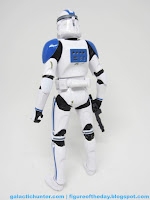 What's more, the back of the figure has a panel that has been decorated blue as well.  The soles of his boots appear to be plain white, but if you're going to leave off a paint application that would be it.  The black gloves, the blue wrist stripes, the grey stripe on the back of the helmet, they're all here.   Articulation is exactly as good as the other clones, because they're all the same body - it's good.   Even though this is an exclusive at my place of employ, I almost wish we sold it individually so we could troop-build with it.  Alas, business reasons happen and it's a four-pack.  I'm glad to say all four figures are made with this much care, so if you feel like raising a few armies it's a snap to do so.   My biased comment is that this is the one I most wanted and I'd say it's the second best trooper in the set.   If opportunity and finances favor you, go ahead and get this set for this figure.  And get extras.  You've got an Anakin that needs an army, right?