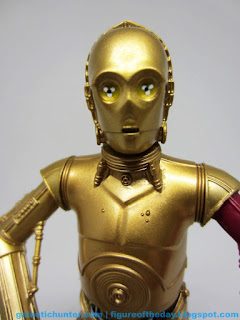 Bio: A fastidious and worry-prone protocol droid, C-3PO longs for more peaceful times, but his continued service to Princess Leia keeps him in the front lines of galactic conflict. (Taken from the figure's packaging.) 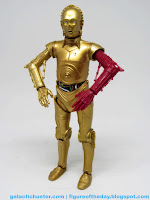 Commentary:  Ever since the line stared, fans asked "Where is C-3PO?"  We got R2-D2 in 2013, and two versions of C-3PO in 2016 - and I'm sure Hasbro is considering more R2-D2 variants to make up for the last few years.   Fans were hoping for a vac-metal gold figure, which Hasbro carefully managed our expectations to say it wouldn't happen.  They didn't mention that the figure wouldn't have accessories or elbow joints, and that's sort of a bummer.  I'm kind of amazed to see myself say that a figure like this - with 23 points of articulation - is something of a disappointment of articulation, but here we are.

C-3PO looks like C-3PO.  Two versions of this The Force Awakens figure - first previewed nearly a year before his release - exist, one has a lighter red arm (seen here) and the other one has a darker red arm.   Nobody knows which is more common yet, but I've seen more of the dark red one in the wild.   The figure is a metallic gold paint, but it isn't reflective.  Sometimes - not always - this paint can age poorly, gooping up years later and discoloring.   There's really no way to know for sure if this will happen until it does, and I've seen it on very few Hasbro C-3PO products so far.   This generous paint slathering may be where the figure's budget went - it doesn't have rotating knees or bending elbows, or an accessory, but it's very pretty.

The eyes have dots to indicate lights, the belly has painted color wires, his palms are partially painted black, and.... that's pretty much it.  C-3PO has been and probably always will be a pretty simple figure.   With the bar joining his upper and lower arms, the elbows are fused by design - so Hasbro had a choice between making an expensive and potentially fragile mechanism, or leaving this element off completely, or just fusing it.  They fused it.  The knees can go forward and backward only, yet the figure was mercifully given rocker ankles.   You should have zero problems making C-3PO look good in your dioramas, but I can't imagine it's going to be in any action fighting poses.

This wave started hitting hard in my area in December, which is nice to finally see.   C-3PO has historically been scarce at first, and then sits.  Forever.   So hopefully you'll see this one, or the all-gold Walgreens version, in the very near future if you haven't yet bought one.  I assume a redeco or three are coming, as we've got three variations so far, so you can take your pick.   The sculpt is good, the deco is good, and it's clearly C-3PO and capable of assuming protocol droid poses.   At the same time, if they did a C-3PO in Hasbro's cheaper 6-inch figure line, you'd probably enjoy that one about as much at 70% cheaper.