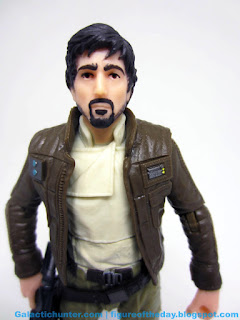 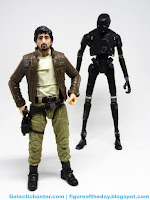 Commentary:  Hasbro can't seem to get hispanic dudes right.   Humans in general seem to be tough to nail, especially when Hasbro's factory pick a wonky plastic for the skin tone and iffy facial hair paint.  The outfit, pose, articulation, and gear for Captain Cassian Andor are great, but the head isn't as Diego Luna-tastic as you might want.  He looks like any of a number of other people, but not quite this guy.

In terms of the costume, it's pretty good.  You get a nice jacket, a nice pair of pants, and a decent shirt.  He has no problem holding his gun, which is handy - even with the clip-on sniper's gear, he can still hold it in both hands.  The figure's range of motion with 27 joints, although some are a little stiff.  The bend-and-swivel wrists are somewhat blocked by the jacket, as is his neck.  The way the jacket piping lines up is a little funky, but it basically works out pretty well.  It feels like a dry run for a Bespin Han Solo figure, complete with working holster. 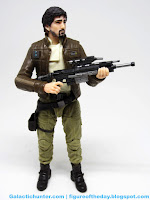 I dislike the head.  It looks like the sculpt might actually be pretty good, but the iffy plastic, terrible facial hair, and not as good as they could be eyes bring it down.  The actor is my age and vaguely adorable - just like me - with a little bit of scruff, a mustache, and a soul patch.  The figure seems to have a goatee and really bad chin line scruff which is unpainted in spots.  I don't think they've quite mastered that look yet - look at all the Poe figures - but it comes off better as a 3 3/4-inch figure than as a 6-inch figure.  Even the Eadu version looks a bit better than this, but it's still not perfect.  I expect customizers will prove that better paint would have saved this, and/or someone will start cranking out bootleg Diego Luna replacement heads.   It's sort of frustrating that Hasbro's human heads are all over the map, and in this era of 3D-scanned likenesses the last mile at the factory is giving us product that just isn't great.  It's not terrible - but it's just kind of frustratingly sub-par.   It's clearly a well-designed figure, executed poorly where it counts the most.  I could live with less articulation if this figure looked perfect.

As part of a 3-pack which infuriatingly includes another identical Jyn Erso (also sold at SDCC, also individually) it's unfortunate that we were asked to pay a $20 tax just to get this Cassian Andor and another, more special Death Trooper.   I do not anticipate more or better versions of this character as an action figure, so I'd say get one when the price is right and hope someone can improve the head for you.  If it's you who improves it, even better.