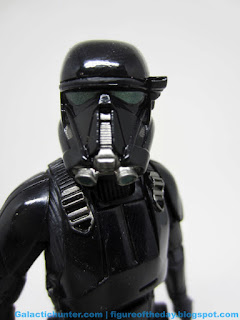 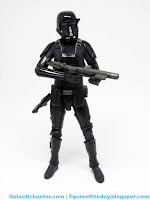 Commentary:  Good, bad, he's a guy with a gun. The unusually tall Death Trooper squad was played up to be the baddest of the bad.   What we saw on screen wasn't quite as amazing as what we got out of our Clone Troopers, even in Revenge of the Sith their quick presence was pretty awesome - seeing what they'd do in a few shots made them seem incredible.   The Death Troopers start out as these evil-looking faceless agents of death, but really all they do is gun down a terrified woman and act as bodyguards for a petty bureaucrat.  Sure, they have some secret twin language, and yeah, the armor's cool - but like so many nifty characters before them the sum total of their coolness could be felt prior to seeing the actual movie.   It's a neat design I have no doubt will become a comic convention staple in no time, but unless they make more appearances and do more cool stuff I don't think a lot of people will be pining for their return.

Thankfully, the figure is pretty good.  A Special Ops commander variant with more gear was sold at Target, but the basic one is pretty nice.  Like the smaller figure, you'll notice much of the armor is similar to that of a basic Stormtrooper.   It's not identical, though - new grooves and lines set it apart, with new knees and distinctive shoes.  The pouches on the belt add a little flair to the design, and the rangefinder on the helmet is a nice touch.  For some reason they even share Darth Vader's  belt buckle despite not being associated with the man on the big screen.   Articulation is good - he can hold the rifle in both hands which come complete with bend-and-swivel wrists.  The ankles rotate nicely, complimented by double knee joints.  For some reason Hasbro has decided the double elbows are no longer necessary, so the classic bend-and-swivel articulation remains to be as good or as bad as you see it.

The black plastic is glossy and shines nicely, with dark green - sadly not bright light green - lights around the chin.  The lenses of the helmet are also green, with some silver accents on the figure.   Hasbro did a good job translating the design to an action figure, complete with a li'l holster to carry the smaller blaster pistol.   This is a figure that delivers on the promise of a good trooper - it's close to great, but not perfect, and comes across as a good figure for the price.  I hope you got as many as you wanted, as they seem to be drying up quickly.   Get one - or five - if you can and are so inclined.  I'm not troop building this scale, but it's a pretty good figure.  It doesn't innovate much - Hasbro has a good template for its troopers and they should be commended for sticking with it - so buy one if your budget allows.