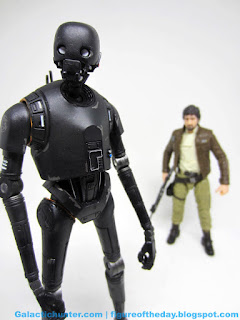 Bio: A reprogrammed Imperial security droid now loyal to the Alliance, K-2SO is an alarming sight standing within a secret Rebel base. The pragmatic droid is an effective insertion agent, as he can blend in perfectly at Imperial installations and outposts. (Taken from the figure's packaging.) 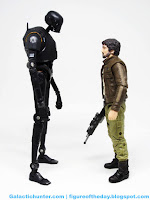 Commentary:  And we're back for a bit!  The very tall much-needed comic relief is here, in 6-inch plastic form! K-2SO is one of the tallest - if not tallest - droids this line may ever see.   It has loads of articulation and, surprisingly, can remain standing upright so far. Given the thin legs and bulky body I can't assume this will last forever, but hey - maybe!  Worst case scenario, we all need to go buy a bunch of doll stands.   I should also note that this toy does not include a blaster - early samples used in photography show a gun, but the Alan Tudyk robot has no hand weapon.

Arguably the bright spot of the new movie, K-2SO continues the long tradition of droids in Star Wars being more human than their flesh-and-blood counterparts.   In the mold of the likes of HK-47, C-3PO, and PROXY, this particular droid is reformatted Empire military hardware with a few problems - hence the interesting personality.  It's a bug, not a feature, and there are multiples of these guys in service that look almost the same.   As such, you could probably use these in your various dioramas since there are no real official playsets being made for anything right now.  The figure is a good one, loaded with articulation and brilliant design cheats.   The elbows, knees, and ankles are open circles in the movie - but that leads to stability problems, so instead Hasbro employed clear plastic filler in there to look like it's clear.   Hasbro is usually good at making decisions to keep figures stable, but clear plastic for joints can be problematic.  (See: DC Collectibles' Batman: The Animated Series, some Funko Legacy figures, some Transformers.)   Since it's PVC, I assume the worst that will happen is some yellowing after exposure to light and/or time.  But for now, at least, it looks good. 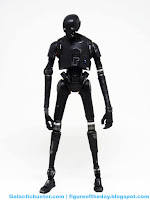 The black metal body is great, with "exposed" damage marks showing the silvery metal underneath and orange on some of the joints.  29 points of articulation keep this droid alive, allowing you bend-and-swivel wrists and numerous other joints all over his body.  Interestingly, the figure has a smell very similar to my childhood Empire Strikes Back-era Darth Vader - I wonder if they used a similar plastic?   The character looks pretty good as there's no human head to replicate, so it's appropriately droid-ey.  You get the Imperial logos, you get the silver joints, it's a big robot with the Stormtrooper-esque "OII" on his back with a little antenna duo.  The design reminds me a lot of the EV-9D9-esque droid from Return of the Jedi that shows up in some of the archive books - no toy was ever made, but it's big and tall and black.  It's consistent with the Empire's general ethos.

Despite the lack of accessories, I like this figure.  A big droid with tons of articulation meets my needs for base level awesomeness, and I assume this is/was/will be the favorite character from the movie for a lot of people.   Get this one for now, I don't expect figures from this movie to be a regular thing down the road.