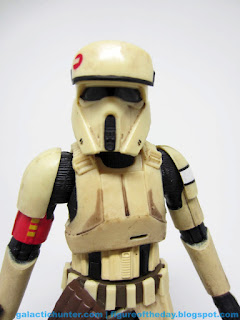 Bio: Specialist stormtroopers stationed at the top secret Imperial military headquarters on Scarif, Shoretroopers patrol the beaches and bunkers of the planetary facility. (Taken from the figure's packaging.) 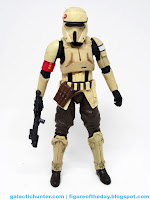 Commentary:  Since the prequels fans have asked "Now how come the Empire didn't have more color in its army?"  The Scarif Stormtrooper shows us that they did, but when they went to the beach with the soft drinks and candy, someone blew them all up.   I find that reasoning a little hard to swallow,  because a) I don't doubt that armor and clothing is manufactured and stored off-world, and b) I snapped some scar tissue in my jaw and after the dreadful internal explosion, holy cow this is killing me.  But I digress.   For reasons only Hasbro understands, the basic Shoretrooper was made as a Walmart exclusive.  The Squad Leader is in the main line.  And don't worry, you're unlikely to actually easily find either for at least a few weeks to months thanks to the new movie release and the legions of people out and about buying Christmas presents for fans and non-fans alike. 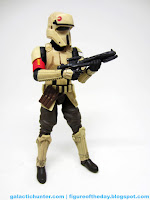 This isn't a bad figure - it's not as cool as the Squad Leader because it's less colorful, but I like it.   The figure is molded in a great sandy brown color and is enhanced with dark brown pants and shoes, a black body glove, and some red on his shoulder with three yellow dots that no doubt signify rank or how many drinks it takes until this guy passes out and someone puts his hand in warm water. The figure is peppered with weathering and swell details, like vents on his helmet and backpack plus a white band on his shoulder.  Again, I don't know why it's here, perhaps it's the color his underpants were prior to the warm water hand dip.   A little red symbol on a forehead ornament looks great, as do the various pouches and buttons on his belt. 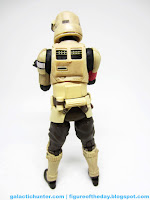 Articulation is better than expected, as Hasbro gave the elbows a little more clearance so he can hold his new blaster in fancy positions.  It looks like a standard Stormtrooper gun, but it has that added little scope thing on the sides.  The blaster deco is also some of Hasbro's finest, with silver highlights/battle damage highlighting the various grooves, tabs, recesses, and embossed bits.  It's cool - you'll be angry they didn't remake the regular Stormtrooper with one.

Our new friend here shares a lot of parts with the Hovertank Pilot (Toys R Us exclusive) and the aforementioned Scarif Stormtrooper Squad Leader.  Those two each have unique belts too, plus very distinctive deco and in the Pilot's case, a unique helmet.   They're all great, but if you want to make the best impression on your desk with one figure go ahead and get that Squad Leader.   If you see the regular shoretrooper, it's pretty fantastic - I would army build these guys if I did such things with the bigger, more expensive figures.  Instead I'll have to settle for not army building the 3 3/4-inch line, which is also too expensive and I can't find them en masse anyway so who cares?  Get this figure if you can see it.   The figure looks like a great post-Return of the Jedi design, despite being a pre-Star Wars design in some respects.   It's more at home with the kind of things I like.

Collector's Notes: I got mine from Walmart.  The store had about a dozen one day and zero the next, which is the way of the Force I guess.