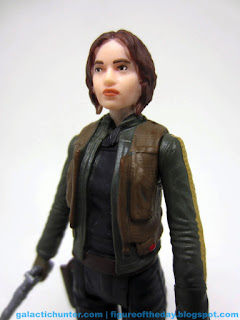 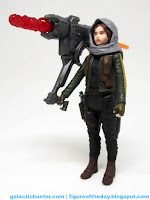 Commentary: Two waves, two Jyn Erso figures - and a third is on the way, presumably in wave 3 or 4.   Hasbro took a lot of heat for not cranking out a lot of Rey early on, and seemed to be allergic to the many-main-character bonanza we usually see in any decent toy line.   Even for the prequels, we tended to get a few Obi-Wan Kenobi figures pretty early on - and now we've got two Jyns without having really much of a clue as to what the story is yet.  Progress!   I assume more figures in more formats are coming, and I'm already looking at this be-scarfed figure as a 12-inch and a 6-inch figure in my home.  Do I need more?  No.  Will I buy more?  Probably.  I like this figure a ridiculous amount.

The first Jyn Erso figure is in an outfit we haven't seen in the marketing much, so it's easier to get more excited about this one. She has a scarf! (Why?) A rank!   A cool vest!   She looks Star Wars-y at this scale in a way that didn't trip my imagination in the larger size.  Weird.  After cracking this one open I ran back to some of my old vehicles and had her pilot the Side Gunner and some other non-movie vehicles - she seems to be right at home in that whole "early Empire" era when you lose the scarf and put her next to a robot and 500 other figures.  I don't know if the hair and skin coloring as a toy are perfect, but the proportions seem good and she has no problems standing or carrying her ridiculously large shoulder-mounted rocket launcher.  Hasbro did a nice job here - finding the center of gravity can be tough, but by gum they did it.  Her smaller blaster fits fine in her fist or holster, making it the must-have Stormtrooper-killing accessory of the season. 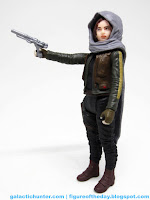 I should also note that her scarf is easily removed.  The rocket-firing weapon looks like it was meant to rest on her shoulder, but it doesn't have to do this to remain upright.   It's neat.  Kids should dig it.

Her pose is normal - I daresay bland and vintage-esque as far as modern figures go - which really does make her feel like a modern retro figure.  Textures on her outfit are pretty flat, lacking the cloth-like feel you saw on some The Force Awakens toys - but there are layers.  Oh, there are layers - a vest, jacket, and shirt cover her body with a hint of an undershirt.  And gloves.  And each garment is painted a distinctive color.     There are even decorated code cylinders and buttons, plus stripes, giving her a fairly ornate look despite visually coming off as being overly decorated.  This is an ideal figure minus articulation and simple things like painted boot soles - which, well, I assume they wouldn't cause more figures to be sold.   You're buying this figure because you want this character in this outfit, and for the time being can't find the super-articulated version which at press time is unavailable.   (I'm betting on December.)    For seven or eight bucks this is one of my favorite new figures, and odds are she'll be around thanks to both of her costumes being sold at two per carton so far.  Grab one if you see it - or get one next year in a 4-pack, or with the AT-ACT in a few weeks.