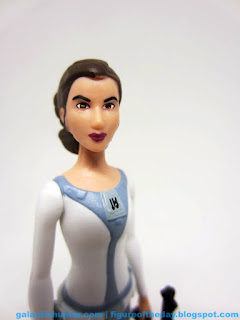 Bio: As Princess of the Royal House of Alderaan, Leia was tasked with the delivery of relief supplies to the needy citizens of Lothal, a useful cover for her true mission of covertly aiding the efforts of the growing rebellion.  (Taken from the figure's packaging.) 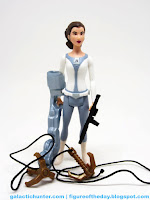 Commentary: So far it seems that Rogue One has more women in it than the entire vintage line from the olden days.  Princess Leia Organa is one of five in the first two waves of the basic figure line - and I do believe this is unprecedented.   Star Wars Rebels has been coming up short on women as toys, but at least we got this one.  Leia appeared in exactly one episode, so there's still hope for Lando's multiple appearances eventually yielding a toy or two.  (I'm deluded.)   The high-profile episode "A Princess on Lothal" allowed the character to appear in a concept-driven outfit with almost boring hair compared to what we've seen elsewhere - but it was fun enough, and the figure is pretty good. 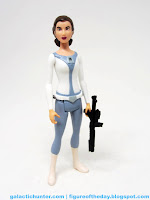 The costume is based on concept artwork, which is why it looks pretty familiar.  Rebels mines this area for new-but-similar designs regularly, and it works out here pretty well.  I have no idea what I would expect space royalty to wear while jaunting around the galaxy, but in this stylized and heightened reality it doesn't seem out of place.  It's an efficient outfit without too many flourishes to animate, or any gowny bits to get in the way of posing or sitting.  Finding her center of gravity for standing can be tough, but not impossible.   It's a decent design. 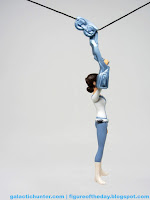 Her weapons include an all-too-familiar Stormtrooper blaster - she must have had hundreds of these - and a new zipline accessory.  It's difficult to get her hand wrapped around the grip, and once you do it's a peculiar design.  The other ziplines in this series go back and forth on the string with no real fuss.  This one goes forward well, but due to the angle at which it was sculpted she can't go back terribly easily.   I suppose it makes some degree of sense, but as far as play goes you can't just have her zip back and forth.  You have to put more effort in to reset it.

Thanks to this being one of very few basic carded Leia figures, I'd say go get it. I doubt she'll get another animated figure based on this appearance, plus it's a wholly-original sculpt.   You've got no reason to skip it, especially if the paint job on the sample you find looks good.   It's not going to change the world, but it's certainly good enough to warrant wasting some time, or gas, or dollars on buying it online.