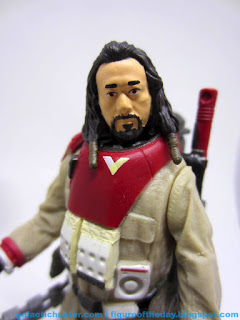 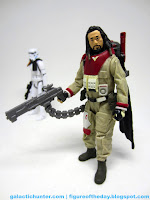 Commentary: I don't really understand why someone is in a 2-pack and someone isn't, but Baze Malbus and his Stormtrooper buddy do make sense once I got them out of the box.   This Stormtrooper has an orange pauldron and is therefore different, and we'll get to him later.  Early buzz about Baze has him as some sort of master weapons smith, and the trailers show Chirrut Imwe with a large bow (which the toy sort of replicates) as a nod to this character trait.  Unless I got that wrong, of course.   This new character is all about firepower and helping his pal, so his "normal" weapon - a gun connected to a backpack via ammo belt - and this is pretty impressive unto itself.  It fits in a slot on his back, allowing you to give him a cape and a lot of firepower. 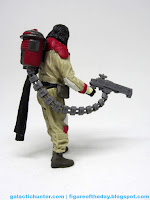 And if that weren't enough, you can swap it out for a much larger, too-large-for-him-to-balance-easily weapon which also has a cool control arm and two firing rockets with rubbery-tipped projectiles.  It's pretty nice - they fire well and, like the other 2-packs, fire via 2 separate buttons on the back.   I prefer the smaller backpack because it allows the figure to stand easily, but man, that bigger backpack.  It's great.   It's wacky but it doesn't seem wildly out of line with the character's design or armor coloring, and if it shows up in the movie I'd probably not be at all surprised.  I still haven't figured out what the thing is on his jacket with the iPod Classic clickwheel on it, but it's neat. 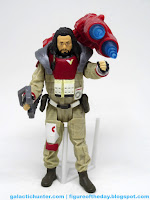 In terms of representation, Asian characters in Star Wars are far and few between.  The presumably wigged star of Chinese cinema Jiang Wen is all but unknown to American moviegoers, but he's a pretty big deal - this should help broaden the series' appeal a bit, and hopefully extend the cast beyond pale Americans or Brits.  As a figure, he looks a lot like the actor - the skin color isn't the same as the white figures, which is good, and the beard is filled in fairly well.   Molded in hair color brown, the skin is painted on and you can see a few spots where the skin could be facial hair or vice-versa.    Still, it looks like the dude on the box and that's probably the most important thing these days.  I really dig the armor, although it's always strange to see just how much the same (or very similar) speed suit/flight suits are used as the basis for so many costumes in the Original Trilogy timeline.   A lot of the pockets all look similar, and the slightly-baggy suit has some swell white and red armored bits on it.   This feels a lot like an action figure that could have been cranked out by Kenner or Fisher-Price in its Adventure People range three decades ago, which is pretty much 100% what I want in a toy from this era of Star Wars. The textures on his costume are good, and the figure looks like one of the better modern Star Wars figures. 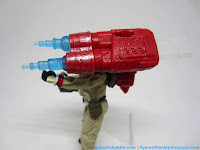 Without having seen the movie, I'm more excited for Rogue One than The Force Awakens.   I like the costumes a lot more, and I love how they can inhabit the same world of imagination that my old toys had, and push the boundaries a bit.   We didn't see a lot of flame throwers or ammo belts 40 years ago, and dudes with long hair?  Unheard of.   Well, unless you count Luke, that is.   Baze Malbus looks like he'd hang out in your Creature Cantina or Imperial Attack Base playsets and fit right in, which has me hopeful for the future of the toys and to a lesser extent, the movies.  Most of the new stuff still looks like Star Wars and that's a tough thing to pull off.