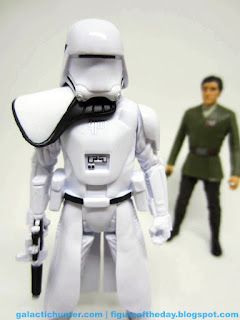 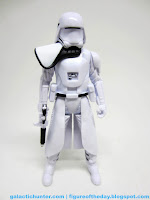 Commentary: Of all the troops to build out quickly, Hasbro wasted no time giving us nearly every possible version of the Snowtrooper Officer.  There are orange, white, and black pauldron versions - and I have no idea what the rankings are.   It's virtually the same as the other releases, with one very obvious change - the stamp on the boot now says "Vietnam." Previous Snowtroopers were stamped out in China.  The rest are more subtle.

On a side-by-side comparison, you can see that while the backpack is similar to the previous release the actual shapes of the objects on the backpack are a little different, particularly on the sides.  The buttons are in the same configurations, but the sizes and how raised they are seem to be clearly changed.   The bottoms of the backpack are also quite different - this white pauldron officer has a much smaller vent on the bottom than previous releases.  The "soft goods" on the arms look a little different, and the chest ornament - a holdover from old McQuarrie art - is now higher on the chest.  It tends to move.  The feet - and seemingly the whole figure - are imperceptibly  larger, mere millimeters taller compared to other releases.  Without holding them next to one another, you'd never notice - it's even impossible to tell in photos. Due to the sculpt changes - it looks the same, the same details are there, but in different sizes and places - this is almost "just different enough to make you mad."  It's like two figures were made from the same set of instructions - you can see the similarities, and you can see that different factories probably interpreted the files slightly differently.  No normal person would probably notice, but the differences are just minor enough that it's notable.  And, of course, the rank pauldron qualifies as significantly different and alone would warrant a purchase.   Buy this set because it'll be different enough on your shelf, but be aware that there could be all sorts of surprise minor changes as we get some of our product from Vietnam now.