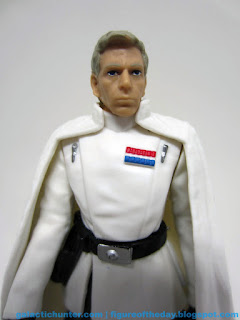 Bio: As director of Advanced Weapons Research for the Imperial military, Director Krennic is obsessed with the completion of the long-delayed Death Star project.  A cruel but brilliant man, Krennic has stated his reputation on the delivery of the functional battle station to the Emperor.  (Taken from the figure's packaging.  Coincidentally as of my writing this, Wikipedia has the exact same wording on it.) 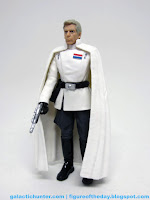 Commentary: Hey, it's - no wait, this isn't Yularen.  It's Director Krennic, or "Orson" to his buddies Wade and Roy.   This is the guy Ben Mendelsohn is playing, and he'll be surrounded by Death Troopers.  Or he would be, if you could buy individually packaged ones right now.   What do we know about him?  Not much - he seems to be a bad guy, but with all of the commentary surrounding allegiances of the new film being complicated we may be treated to some interesting traitors.  Or not.  You know how these information campaigns go.   "Old White Guy" is an important recurring description of most Star Wars villains, covering the likes of Tarkin and Dooku and the Emperor himself.   The buzz surrounding Krennic is good, but here's hoping for an alien or maybe even a lady bad guy down the road.   I've got Imperial action figures - and while this is a neat one, I'd be all for something a little less traditional.

The Director Krennic figure is nifty, tough, and bitchin'.   The cape is a soft plastic that's removable and strangely not rubbery - but it's so thin that I would advise you take great care with it.  Don't let it touch red plastic.  DO NOT let it touch red plastic - and don't store it in bins.   I bet it'll tear or discolor.  Be careful - he's one per case right now too, so you'll want to be sure you get one.  The cape comes off nicely, and hugs his neck and shoulder nicely.  It's touch to get his blaster in its holster while wearing his cape, thanks to the position of his limb and the fact that the arm is a little awkwardly close to the body.   Also, he comes with a giant rocket launcher that while he can hold it and stand, the cape tends to get in the way.  The spring-loaded rocket works nicely and the design draws inspiration from the standard Stormtrooper gun that you'll recognize from having seen Star Wars toys in such places as your house. 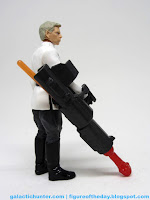 The costume is similar to that of the original movie's Yularen - or how many assume it to be, with black pants and a white jacket.  Gloves are a nice touch, and the rank pin is likely to be a bit of a head-scratcher because apparently they've changed what means what over the years and I can't even say for certain if the current configurations are applied consistently, or if they're trying to just make it look more or less right.  With two rows of six boxes and two code cylinders, he's probably around the status of an Admiral or higher.   It's colorful, and it looks nice.   What doesn't look nice is the Director's ability to sit which is blocked by his skirt piece.   This is a figure designed for standing, and it's probably just as well given that the line is currently severely lacking in Imperial vehicles.   I do not expect we will see Krennic's shuttle as a toy... or Kylo Ren's, or anybody else's, until Hasbro has to make a big move to convince retail that it fully supports the brand with the biggest, craziest toys.   Even then, it would probably be in their best interests to do something with more play features, but I digress - this is a "stand there and look good figure," to borrow one of Hasbro's briefly-used catchphrases.

The head sculpt is nice, with a good expression and decent hair.  Boots, gloves, and belt are shiny and all the colors seem to be about right.  I don't doubt a few fans would have wished for a super-articulated version with cloth soft goods - I certainly wouldn't mind seeing if Hasbro could do one using the Needa body, but I'm not getting my hopes up these days.    What we have is a perfectly usable figure that's good for displays, but isn't much of a toy thanks to restrictions on movement which come courtesy of his fashion choices.   If you collect carded or display on a shelf or desk, this is a fantastic figure that you should buy.  If you're 12, odds are you're going to find his functionality lacking.   For the usual reasons, I'd say get yourself Krennic.  I don't expect Rogue One toys to be around long given the Disneylucasfilm group's short attention span on the new movies and TV shows so far, so get while the getting is at retail.

I think your reference to Garfield and Friends just cemented you as my favorite person on the internet, lol.