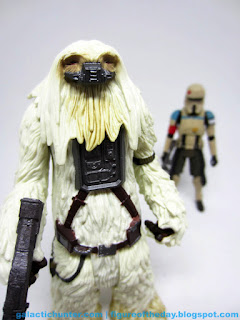 Bio: Moroff seeks out combat zones to sell his brawn and firepower to anyone who might need it.  The mighty Gigoran mercenary figures there's money to be made for a towering heavy gunner.  (Taken from the figure's packaging.) 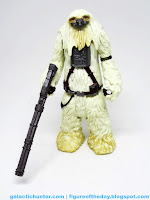 Commentary: Baby Wampa.  Albino Ludo.   Darla.  Edgar Winter wannabe. Moroff has suffered numerous derisive nicknames since leaking, and as of now we don't know much about his deal other than he's likely to be a paid Rebel associate and is tall and hairy.  He might be a little too big to cram in the standardized action figure bubble, so shoving him in a 2-pack with a Stormtrooper variant you'll want and a gun that's just plain ridiculously great was a smart move.   Heck, for all I know the dual-cannon-backpack thing is in the movie - it fits his character and we do see a backpack in some photos.  It's just so... big.   Like, Muftak-big. 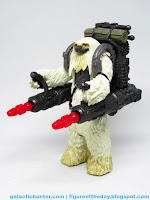 Collectors had a lot of complaints about The Force Awakens, as did fair-weather fans and tourists, but one of the more consistent ones was a lack of aliens and robots.   Well, here's an alien!  Along with Pao, we've got a couple - and there are others in the movie that don't yet have toys.   Moroff is colored very similarly to recent Wampa figures, complete with yellowed feet due to dirt or poor aim in the little aliens' room.   Massive paws and a bulky build results in a figure that's bigger than Chewbacca or Darth Vader, which is rather interesting as Star Wars' bruisers don't tend to get quite this large most of the time.  He has no problem standing thanks to his giant feet, and I've had no problems getting his hands to hold his weapons.  Functionally, he's great. 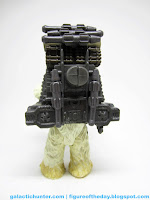 The movie stills we've seen imply a paler, fairer figure than Hasbro delivered.   The illustrations are straight-up white, whereas the figure has a little bit of brown around the eyes and some hints at color.   This could be a design change, or Hasbro taking toyetic license, or someone just saying "It looks like a Wampa, let's color it like a Wampa." And someone else going "I bet they all look alike to you, you racist."  And then there's a chuckle, awkward, but tense.   I digress.   He turned out looking well, but accurate?  I have no idea.   At this point we can only assume all the straps and belts that seem to hold his breathing gear in place and keep it running are where they should be, but we won't know for sure until more books start leaking and/or we go see the movie. 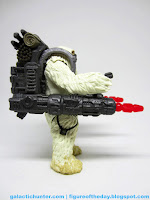 The fur texture is wonderful - on the head, it hangs not unlike Brak.  On the body, it's a little more matted, a little messier.   The shaggy design of his feet allows him to lean forward quite a bit without his center of gravity causing him to topple over, and this also allows him to wear a massive dual-barrel cannon backpack.   It's huge - Hasbro's ability to get these figures to carry around such massive hardware without falling flat on their faces shows a huge step forward in their engineering thinking.  I mean, just a year ago we were trying to cram Poe Dameron into the X-Wing with which he was packed, and now we have these ridiculous contraptions strapped to our figures with minimal problems.   (Baze Malbus could've used more time in the oven, but I digress.)   Articulation and weapons compatibility are decent - I'm sure more joints would be appreciated by many fans, but while it'd probably do wonders on a figure like Pao where there are more breaks in the design, an articulated Moroff would probably look pretty iffy.   Maybe swappable limbs would be nice.

Anyway, of the three two-packs released for Rogue One movie characters so far this is my favorite.  Moroff is big and cute, and he looks like he belongs in your Cantina diorama.   Your overflowing, cardboard Cantina diorama from 18 years ago.   His partner figure is quite excellent, and the pair for $15 is a decent deal.   If you stumble on this set, get it.   It's worth the asking price and the quality is pretty good - two new designs are a welcome addition to any line.