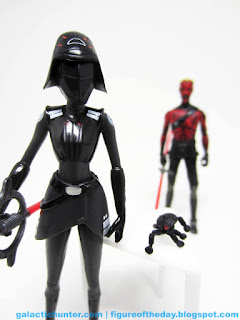 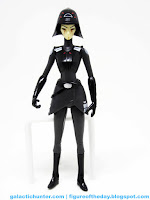 Commentary: I'm pretty forgiving.  Generally speaking my bar for success is somewhat low, as things like "can hold accessory while standing" are an easily achieved and important goal.  The Seventh Sister Inquisitor looks like she was undercooked.   The sculpt is good - the body and form look good, the head is pretty good, and the removable mask fits like a glove - it's one of Hasbro's finest applications of such interaction at this size.  But her legs don't really move.  And she can't stand so good.   And there's a thing on her back that looks like it was sculpted to mount an accessory which Hasbro neglected to include.

This figure has no foot peg holes.  She has very thin and spindly legs.  Her hips - at least on mine - seem fused, with a skirt piece that restricts movement were one wanting to apply head in a way that might remedy this.  Her lightsaber is too short to use as a cane to prop her up.  Her hands aren't even very good about gripping the lightsaber - it's unusually thick and her hands are unusually small.  The Seventh Sister's arms are also quite spindly, so with time they're going to sag under the weight of anything she may be holding.   There's really no sugarcoating it - this is a poorly engineered figure.  A display stand (especially with the hole on her back) could be useful in keeping her upright, and at least mine isn't capable of sitting.   So what good is it? 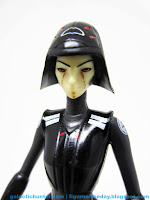 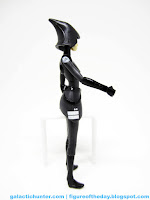 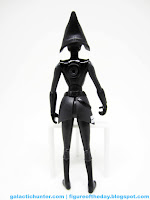 She's painted well, with glossy armor and matte grey soft bits, with enough flourishes and line art to bring out some of the cooler bits of the costume.  I love the hat and mask, and as a figure you leave in the packaging she's really great.  As a toy?  I don't think I'm being hyperbolic when I say she's the worst since Disney took over... if not longer.  Hasbro's factory did a good job of making this figure look good, but I think we'd have been better off with a non-articulated figure or something that was super-articulated.  Five joints don't do her any favors, nor does her center of gravity.  I assume Rebels fans will want her due to being one of very few collectibles of this character, or because she comes with an acceptable Maul.  If Hasbro ever sold her by her lonesome, I'd advise skipping it unless I just got saddled with a bum one. 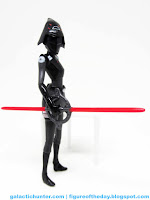 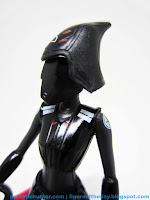 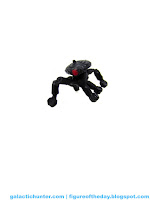 One nifty bonus is her sidekick mimic droid - a tiny probe spy.  It has arms that look like they could have been meant for the hole on her back, but the form fit isn't there and the shapes don't match.  It's also small enough to be easily lost.   I wish I could say that I hope Hasbro tries again, but the character's fate on the series combined with a lack of figures from the show would have me think that this is it for this size.   Perhaps the future holds something brighter, but I feel terribly for any kid who saves their money to get this one.  Upon opening, it's just going to be depressing.

The hole in her back is for the droid. You can pull the droid head off of it's legs and put it on her back.