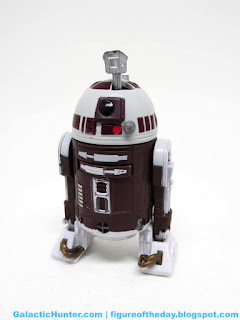 Bio: R7-D4 was an Astromech droid that helped aboard Jedi Master Plo Koon's Delta-7B starfighter, Blade of Dorin. He had brown markings and was a veteran of numerous battles. (Stolen from Wookieepedia.) 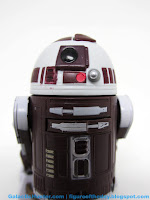 Commentary: In the boxed set of astromech droids currently exclusive to Entertainment Earth, only R7-D4 can't be said to be truly, 100% completely new.   An animated R7-D4 [FOTD #1658] was sold in 2011, or an entire lifetime ago if you're a kid.   This version is very similar in terms of decoration, but the 2016 "movie" toy uses the 2010 R2-D2 mold, rather than an original build-a-droid mold that may or may have not been part of a build-a-figure concept for The Clone Wars you've never heard about.

As always, I was involved in this set's creation so I'm biased.  I think you know that but I'm required to share it.

Plo Koon has had a few astromechs to call his own, and be he cartoony or realistic he can use this one.  The maroon coloring looks pretty sharp and doesn't at all match his blue and white striped Jedi Starfighters.   This version has a hole in his head thanks to the mold's original use as R2-D2, but other than that either you're going to love it or hate it.  I've seen mixed feedback, and while I appreciate that not everybody is crazy about (or remembers) the mold, it's also the only reuse of it so far.  The set, I mean.  Because there are six of them. 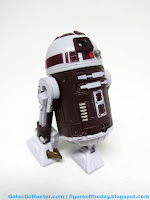 The third leg retracts, and also serves as a lever to raise the sensorscope.   Not everybody likes that - but it's a neat feature and one we don't see a lot since the loss of the "Vintage" 2004 astromech mold from circulation not too long ago.   A pop-open compartment opens and closes, but not every sample closes perfectly - I'm seeing if I can somehow heat/warp/will it back into perfect position, as some droids work great and some need coaxing.  With rolling wheels and a slightly smaller build, it's a unique droid and doesn't quite match what Disney is doing (which I am told Hasbro has no involvement in) for the theme parks.  It's an interesting interpretation of the droid with a matte grey dome, as I'm unsure if the artist's intent was to do silver or grey on the TV show.  Either way, I like how it looks - it's distinctive, and I could use some differently colored domes in my toy box.