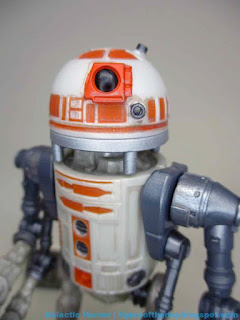 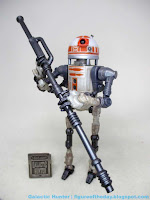 Commentary: It has a lot of new parts, but isn't as good as you might want. MA-13 takes the existing droid dome and body, and adds new arms, a new neck, a new lower torso, and legs. It's impressive! It's just not very accurate, and the parts could be better. For people who display figures and don't touch them much, you'll probably love this. If you want something that holds together and is perfect, this ain't it.

Due to the lighting I assumed the dome was silver, but assuming the cream dome with orange panels are right, it's still undercooked. The burn marks are missing, the light under the eye is absent, the two rectangles on the right side of the dome aren't the right color, and there's no silver equator under the dome either - and one could have been added, thanks to the newly-sculpted neck extender. I realize this probably sounds petty, but when you're buying a $45 officially licensed product, it should have more deco than a custom some fan made. If Hasbro wanted to do one, they've got ample reason to try to make something better. 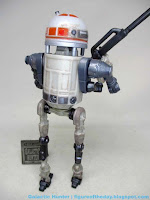 Reusing the droid body makes sense for budget reasons, and it has a lot of good hooks on it to build out the droid. The torso is the same as you've seen for years, with the arms plugging in where the limbs usually go and the lower torso plugging in where leg #3 goes. They did a good job reusing existing parts, but again, the deco is a little soft given the lack of burn marks. As an all-new droid, this is a good design - but what we saw was a rustbucket, and it would have been nice to see the paint reflect it. Similarly, the newly-tooled limbs lack some of the deco seen on the episode, but odds are nobody will notice - or maybe it was a truck of the light. But either way, the missing bands of beige on the shoulder and hips is apparent. Will most fans notice? Probably not.

The new limbs are loaded with articulation, but they also pop apart in spots pretty easily - while getting MA-13 to pose for photos, the smaller arms popped apart at the elbow. The arm assemblies aren't terribly sturdy when mounted to the body, either, so this is less of a toy and more of a collectible you'll need to carefully pose, and I assume the experience won't leave you wanting to play with him very much. Given the demands of adult collectors, I think Disney did a good job delivering things like bend-and-swivel knees and elbows, and charged accordingly. They didn't skimp. Did this droid need articulated ankles? No, but they're here. Given that I find it unlikely we'll see this particular droid build used very often, it's appreciated even though it's not entirely as sturdy as I would like for a souvenir pack I assume will be bought by kids as well as adults. He can stand, he holds his oar, and you can put him in wacky fighting poses if you want. Maybe they'll reuse him for a lightsaber training droid some day. All I can say is the sculptors and designers seem to have done their work, just be ready to lose a limb once or twice if you aren't careful.

It's a good effort, but not good enough to be perfect - the burn marks are missing, the arms aren't quite the right color, and the limbs pop off or apart pretty easily. If Hasbro remade the figure with better limbs and better paint for $20, I'd buy it. If there's never a better version, this is pretty good - but I would nudge you to version 2.0 if/when it comes to exist. Until then, droid fans will no doubt want it just because it's a cool, weird design even if it falls short of being an authentic recreation of what you saw in the small lava-strewn screen.