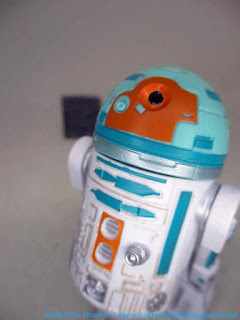 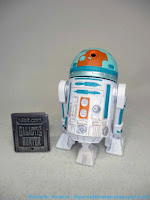 Commentary: New parts! N0-AH appeared in the second season of The Mandalorian as some junk the Jawas picked up. Why is this one named that? I have no idea - but I do know the dome shares parts with a Disney Galactic Starcruiser-exclusive figure, while the body with the restraining bolt was used on another droid a few years ago. I like this one. I don't even remember seeing him in the episode, I just like it.

The new dome is the highlight, with teal plastic and a light paint wipe that brings out the dome's many details. I'm not super familiar with the new design as of my writing this, so I love it and assume it's accurate. The orange "face" looks great, the recessed eye is a good look, and a few panels around the sides and back look designed to be removed for other plug-in bits down the road. Neat! There's a darker teal band around the neck and the top of the dome too, plus other painted grime, vents, and other details. It's so nice to have a new dome, it makes it easy to recommend this set to any droid fanatic. (A similar dome with a different body was also used in Solo: A Star Wars Story. 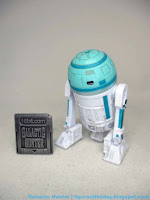 The body matches the few photos I've seen. It's the standard legs with a more-or-less standard body, complete with restraining bolt. There's orange detail on the chest along with tons of teal panels, plus a lot of subtle weathering all over the white parts. If you collect droids, you can tell that it's different enough to be interesting... but it's also Yet Another Droid in a line where completism is nigh-impossible even if you've been paying attention since the beginning. I should note, the shoulders of the droid in The Mandalorian (visible when Cobb Vanth said "they offered their finest in exchange") has silver prongs on them which the figure lacks, most likely due to reusing parts from another droid. Since Disney and toymakers generally don't like to tool new parts unless they're forced to do so, you get smooth shoulders here.

I like this figure! It looks like a weird retro appliance you could find at Space Sears before I was born. Other than the black eye being a bit off-center, it's a well-made figure and you'd be happy to blow $13 or so on it. It's part of a $45 set with 3 other very compelling droids, so I'd say just get it if your budget allows.