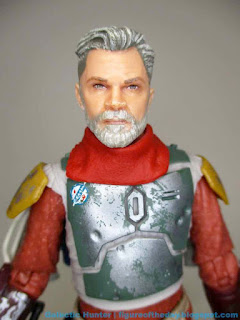 Bio: The marshal of Mos Pelgo, a small town on Tatooine, Cobb Vanth has earned the trust of the townsfolk as a capable peacekeeper and leader. (Taken from the packaging.) 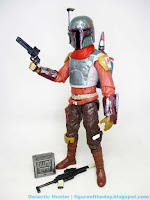 Commentary: Rewatching The Mandalorian last year, I was taken aback by just ow many awesome characters were there that would make toys and probably have good kid appeal. An old west marshall that somehow got Boba Fett's laundry, Cobb Vanth is kind of perfect. If he knew of the significance of the armor, it'd be dopey - but he just got some junk from Jawas, and he wears it, because why the heck not. It's kind of cool. It's not too much of a contrivance that Mando found him given he was looking for people with a specific kind of unusual armor, and you'll probably be looking for him too. It's a good figure and I wish they had him in retro/vintage form. 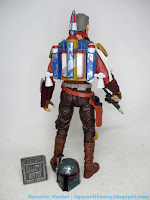 The figure may prove to be a part of some venn diagram of multiple figures sharing parts to relieve you of your money. The two Tython Boba Fett figures, plus the "re-armor" Boba Fett, all may overlap a bit - we're going to have to wait and see when those final releases come out. Cobb Vanth's helmet fits right on Tython Boba Fett (the Tusken suit), which could be a coincidence. You could probably mix and match parts of these figures to get something interesting, but I don't want to pry anything apart. The scuffed-up helmet looks great, with more silver than before. The blasters look more or less like the reference photos, and the jetpack is similarly messed up - but looks a little different from the Return of the Jedi one. Obviously the rocket is totally different, but some of the greeblies and shapes look different than the ROTJ Boba we got last year. I'm surprised they didn't share parts. The silver stripe is a nice addition, but I could've stood to have even more silver scuffing. It fits nicely on the back.

The figure itself is your basic space cowboy. Marshall Handsome of Mos Pelgo has nice hair and photoreal paint, a bit glossier than I'd like but it still looks good. The armor is nicely abused, with awesome boots and nice pants. Everything moves well, with legs that can swing forward and joints that are stiff, but not ratchety. The engineering here is great. The arms move nicely, but the elbow bend isn't as deep as some other recent figures - they stop at about 90 degrees. Still, it doesn't stop him from looking awesome, posing well, and generally looking like the armor's a part of the character. Even though there are gleefully awkward bits like the turtleneck popping out of the armor, it all fits as a guy who found something cool in the dumpster and went for it. 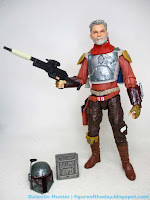 Everybody looks at the Disney era differently, as we can all see the thought processes that went on behind things like Rogue One (the ultimate 1990s RPG/Game/Expanded Universe pastiche) and on things like the Mandoverse (a bunch of people are playing with things, sometimes they know what they are, sometimes they don't and it's more fun when they don't.) While I think I would positively cringe at seeing Star Wars focus solely on the new films, I'd be more or less accepting of an all Disney+ show shift to the toy line. (A lot of good movie stuff shows up in the shows, anyway.) Cobb Vanth is a fascinating way to introduce a character that kids will probably love, if they ever had a crack at the toys, and they won't. But fans like him too, he wasn't a jerk and let Mando take the armor which went to Boba Fett and things are all nice and good. Well, maybe Cobb Vanth himself needs some help, but that's not what this feature is about.

I really like this figure - it immediately clicked with me just because it was awesome. I love that they managed to do something wholly weird to sell you a Boba Fett that's not Boba Fett, and give us a new character, and put in a good actor, and generally remix everything without talking down to us. Get this one if you can. Pay whatever's reasonable. I look forward to Hasbro hopefully doing a de-armored version later... but especially a 3 3/4-inch one, please, and thank you.

What's not to love about a gunslinger wearing a dickie? And I'm pretty sure that silver stripe on the backpack is meant to be duck tape, especially since SWU ducks are canonical thanks to the prequels.