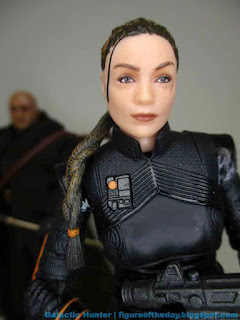 Bio: An assassin and elite mercenary who has worked for all the top syndicates. Clever, capable, and cunning, she is a formidable opponent. (Taken from the packaging.) 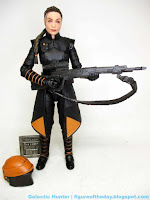 Commentary: Since her debut in the very first season of The Mandalorian, Fennec Shand made quite an impression - and now she's here! She appeared on The Bad Batch too, showing she neither ages nor changes her clothes. Given how frequently hair and clothes change on Earth it's kind of ridiculous - but whatever, she's recognizable, and it's a cool outfit.

The Ming-Na Wen likeness is great for all you The Single Guy fans out there, with hair that's pretty much a perfect match for her Star Wars appearances - you can see ornate braids. Rather than use separately molded "wig" parts, her hair is painted on perfectly - a tough thing to get right with a strand on her face. The color looks great too, with light brown highlights for good measure. 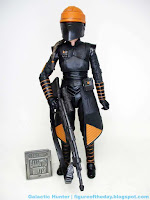 The black costume with orange highlights is great, but has no soft goods - it's all molded plastic. She won't be sitting, and that's OK given she does very little of that. The ornate patterns in the costume are really neat - there are all sorts of folds, creases, and patterns quilted in there. What's the most important, though, is that she can hold the rifle and the helmet fits on her head without too much of a struggle. For a figure that looks good standing around, she's one of the best.

Sculpt and deco are good, but how can I not talk about articulation? All of the joints are fairly well hidden in the costume. The ab joint is in a natural break in the costume. All the ankles, elbows, shoulders, and wrists tuck in the costume nicely. Things swivel fairly freely without concern of any unsightly gaps - the engineers did a great job here. That's tough to do, and it's appreciated. Her helmet is also pretty nice, but seems a smidgen brighter and cleaner than on the show. I still like it, but version 2.0 could use some new paint.

I don't know if it's perfect, but it's close - the exaggerated orange rings on the gloves look superb, and maybe we could've used some more definition in the orange at hte bottom of her vest. For $23 it's a spectacularly good figure, and one I'd say is worth picking up unless Hasbro finds a way to make these more eerily realistic as time goes on. She's a fun character and a good figure - unless you hate this scale, it's a must-buy.