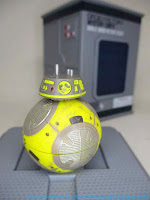 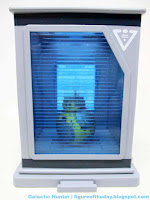 Commentary: A friend of mine got me a smattering of Droid factory Mystery Crates, which seem to be utterly terrible packaging - I assume these will tank unless they have an amazing point-of-sale display. It's a $15 gray box with no mention of Star Wars or what's inside. Upon getting these I sorted them by weight, with these generally being about 103 grams (astromechs) and 110 grams (BB droids.) JB-9 is the latter, heavier thanks to the weighted ball. 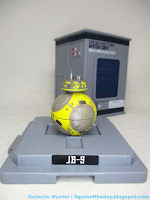 The figure comes packaged in a stackable, connectible crate. When you open it, the base has a place for a name plate sticker. A black "Droid Depot" bag holds a figure and the sticker, and your robot comes in pieces - this is the first time Disney BB droids were sold in a way where the end user has to assemble the parts. The core ball has some blue lights painted on it, but it's mostly plain gray. Assembly is easy - connect the two shell pieces over the weighted ball, and plug in the head. Simple. 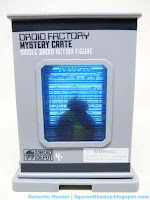 JB-9 doesn't exist in the movies or streaming shows - so far as I know - and currently supposedly only exists as something at Disney parks around Galaxy's Edge. I've never been to it, so I can't say if it's true. That would make this yellow, gray, and silver souvenir a copy of something that you might have seen if you went to the right spot of the theme park, but to most fans, it'll just be another robot. And it's OK - but the pictures make the real deal look cooler, with school bus yellow painted parts and darker, more metallic panels around the vents. This isn't to say it isn't any good, but it's almost a different thing. The gray plastic doesn't really register as bare steel or anything like that, but it looks decent.

The head is molded in gray with yellow painted panels, while the body is molded in yellow with some silver and grey paint. Also, some excellent brown weathering on the body - it's subtle, and they did a good job with it. The display stand has four indentations - three for astromech feet, and one for a BB ball. It's a really neat package overall, with too much packaging and arguably a too-high price tag for a mystery figure. (After all, Hasbro recently sold us 2 BB droids for $10 as Target exclusives.) I think robot completists are going to love these, but there are so few left after Disney pulled it's 1:4 astromechs in that ride vehicle - heck, even I haven't been able to get those yet! But I like this, and if you can get it at or around $15, you may want to add it to the droid pool.

I have one of those Rise of the Resistance 3.75" scale escape pod vehicles with the First Order Astromech (the silver accented droid variant) from a trip to Disneyland in October, but I didn't see ANY two months later in December. You said they got pulled from stores by Disney? Just wondering if you know why, if I'm understanding what you wrote correctly. Thanks!